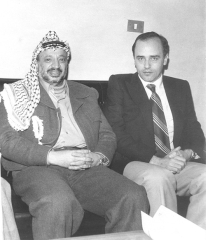 Wednesday night (I’ve decided that it’s kinda my “thing” to begin my blogs with a simple statement of when I’m writing. I don’t care if you saw it somewhere else first, it’s still my thing) and I’m over at Anthony’s. At the moment, everyone has left me here to go somewhere else – and I’m all alone in the house save for my sleeping baby and Anthony’s sleeping daughter. Seeing as this is, understandably, not the most exciting of times, I decided to write to pass the time.

Today work was a regular blitzkrieg… an assault on all fronts. One of those days spent mentally juggling task after task, all the while driving to get as much done in the time available. I’m actually proud of my efforts today, I got a lot done – and allowed only a few distractions to sidetrack me. It’s at times like these, these “peaks,” that I feel like I earn my pay. It kinda makes up for that time I lied and said I had a dentist appointment and instead went home to take a nap, or that time I hid out down in the cafeteria reading, or when I purposely don’t answer the phone when the caller ID tells me it’s someone with whom I’m going to have to have a long, drawn-out conversation. Yeah, totally makes up for all that.

Big day today for the left-leaners out there today, the house, the senate, the don’t-let-the-door-hit-you-on-the-Ashcroft. Yes, big day indeed. Methinks, though, with all the fanfare and media coverage, that those dems better get to workin’ like, stat. Someone needs to get a platform, someone needs to do something, make something happen. Because, I’m of the opinion that, If the party of the ass decides to rest on their laurels for two years expecting their “Bush is dumb, Iraq is a mess” message to carry them in ’08 – they ain’t gonna win no elections. So, let’s see what ya got, guys and gals – get out there and raise taxes, take guns, invite the terrorists to dinner, and turn our children into godless homos. Yay!

What’s up with the Colbert Report lately? This Tek Jansen crap is boring and unfunny. Get with it Stephen.