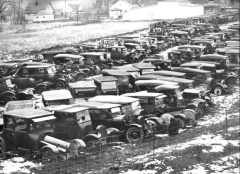 Another Monday and I’m just sitting here downloading some music.

Wow, wrote those words and passed out snoring for 30min, some kind of magic dust has settled over me and I simply lost consciousness for a bit. No problem, dinner was Sharaun’s fantastic potato chowder (one of my favorite meals of all-time), and cleanup is a snap, and I’ve got the writing itch tonight – so I should be able to make up for the unexpected slumber.

This morning on the way to work, I saw a high-school couple waiting to cross the street. The young buck had has arm flung around his quarry, making a public display of their union. Seeing them fondle and peck at each other as they waited to cross reminded me of my own high school relationships. Rushing to pre-appointed spots in the scant 5min between classes to touch tongues. High school in Florida was hot, so midday between-class kisses were underscored with a heady scent that was combination of morning soap, teenage perfume, and summer sweat. To a boy of fifteen, those minute-long makeout breaks were something to be looked forward to – as well as a public flaunting of virility for all to see: that guy is workin’ it. Looking back now, those unbridled hormones and PDA seem “gross” and inappropriate – but thankfully youth blinds one to such social stigmas and leaves you free to grope and groan before the world without shame. Ahhh… youth… you fickle bitch, whither hast thou gone?

If I won the lottery, one of the amenities I would allow myself would be clothing myself exclusively in hand-tailored clothes. Nothing fancy, mind you, but tailored specifically to me nonetheless. I hate the way most clothes fit me, and, yes, I realize I can change this with a diet and exercise regime – but tailored clothes just seem so much more regal. I could stop my jeans from binding up near the top of my thighs when I walk, get shirts that don’t pull to one side leaving one sleeve sitting further up my arm than the other, put pockets where I want them for what I need them, and maybe get a suitjacket that isn’t more like a straightjacket in the shoulders. I think I have this thought every year upon the return of jean season, I hate 90% of the long pants I have – and the three pair I enjoy are about worn out. Curses.

I toy all the time with changing my WordPress theme, updating it to the newer more modular-type themes that more recent versions of WP use. Mine is lovingly hand-crafted (read: spaghetti-code CSS) and built on the old legacy style theme templates. Sometimes I just browse through themes seeing if there’s anything that I could see myself simply going hard-over to, but I never find anything as simple or clean as what you currently see. Besides, I’ve kind of grown fond of the boxy greenness, despite its shortcomings. So, for now, I’ll leave it. Who knows, as the years continue to go by and if I continue to write through them, I’ll likely be forced to update and move along. But until then, Sounds Familiar finna keep it real.