Yeah, so I missed Shanghai days four and five, I was tired.

Got all the Halloween decorations up today, sans the coffin – which is still under construction. Construction that is moving along well, with expectations for the finished product set somewhere around Wednesday. Sunday was devoted to painting the thing, and getting all the years’ prior props up and running. The witch in the new location looks great, and the graveyard looks as good as ever after only minor repairs. Later this week I’ll try and post a picture of the entire spread… for some reason. Until then, you can see an artsy video montage of the popup progress we made Saturday by clicking the picture of my hard-working comrades helping out below (recommend broadband, it’s over a meg): 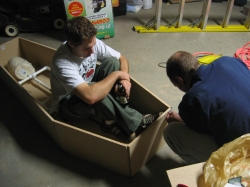 Long paragraph coming, I didn’t know where to break it up. Had a really disturbing dream this morning, woke up in one of those still-asleep half-whisper screams. I’m gonna lay it out for ya, because I was actually pretty proud of dreaming it – like a little screenplay I wrote spontaneously in my sleep or something.

I checked into a hotel, not a particularly nice one, by the beach. They gave me two keys, those credit card kind, and I headed up to my room. When I got in the room, I tossed one key on the bed and noticed a pile of clothes there. Not recognizing them, I walked over to check them out. As I looked through them, I noticed they were little girls’ clothes, maybe a girl of 10 or 11. A detail that stuck in my memory after waking was seeing a little spot of blood on the pair of girls panties that were mixed in the small pile. (Yeah, I know… I have no idea). Guessing they were left by the previous guest, I moved toward the phone to call the front desk. But, before I could, something – it’s a dream, remember – made me realize that these weren’t forgotten clothes, but that the owner was still in the room somewhere. I decided to look around. I couldn’t find the girl, so I spoke out loud, “You might as well come out, I’m about to call the front desk anyway.” A young girl walked out of the bathroom, where she was hiding in the shower. She apologized to me, picked up her clothes, and headed for the door. I asked her if she’d forgot her clothes when she checked out, and where was her key? Then, the realization sunk in that this girl hadn’t stayed here – but she lived here, under the radar. Next, thanks to dream magic, her mother was with us in the room – and they were both apologizing to me. I told them it was OK, and not to worry about it. Just as the door was closing behind them, I flashed back to my memory of the little girl’s face as she and her mom were standing there and realized – that wasn’t her mom at all. Just as I was turning to the door to look outside and see if she was OK, an incredibly loud noise came from the other side. Without seeing it, I knew the loud bang was the girl’s body hitting the door, and the sound of fluid was her blood spilling. That’s when I woke up.

What the heck is that all about?

I’m really tired, even though I wanted to write more about stuff. I guess I spent too much time making that movie up there and wasted all my drive on that.

One Reply to “no jetlag”