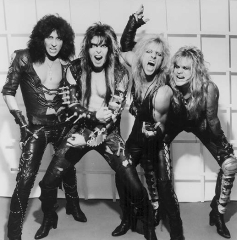 Hey Monday, and a good one at that. I think I liked my weekend so much I didn’t want it to end, but more about that later. Tonight was a big night: Keaton’s 1st “solid” food. They call the stuff “rice cereal,” but it’s just mush. She really doesn’t have the whole open-mouthed eating thing down yet, and insists on sucking the spoon. It works, but it’s slow. We filmed it, of course – I think it’s required.

Woke up today and decided I wanted to work from home. Sometimes this is legit, sometimes not. Today, though, my day was 80% consumed with meetings – and I can call into those from home just as easily. The weather has changed from last week’s 100°+ afternoons and I was able to have the house and work in the fresh breeze. Spent some of my lunch break fashioning a couple homemade wasp traps. The wasps in my backyard are worse than any previous year I can remember, they are thick. In fact, when I went outside to scavenge a used two-liter from the recycle bin in order to make the wasp trap, I ended up running back to the house with my arms flailing in wasp-defense. It’s like they knew I was up to something. I made two traps, one baited with meat and one baited with sweet. Wasps are attracted to either depending on the time of year, and since it’s right on the line between the two I decided to try each and stick with the best performer. The frustrating thing is, there are no visible nests in my eaves – but I have observed numerous wasps flying under the tiles on my roof and into my rain gutters. I think they are constructing a massive hidden wasp-civilization.

This new Midlake album, The Trials of Van Occupanther, is outstanding. I love theme and words of the opening track, and the slow creeping harmonies throughout. With melodies recall slower Radiohead, Steely Dan, and even Paul McCartney. Sometimes the “softest” or “laziest” albums are the ones that sound best played ear-burstingly loud, and that’s the case with this misleadingly-sleepy record. But man, this album is ridicu-good. I wish it was colder outside though, and maybe a little grey… this album sounds cold and grey.

Found this great site today, it indexes torrents of public domain movies and TV broadcasts (items which have fallen out of copyright and are thus legally owned by the public and freely distributable). There are some great flicks, and some real stinkers, on there. Thing is, I like a reeking stinker every now and again for sheer tackiness and comedy – so this site is full of gems to me. I want to start watching these things, maybe one per flight or something. What a great way to legally watch some interesting old movies, especially for B-movie fans like me. I mean, who not like down a site that has every episode of the old Flash Gordon or Radar Men from the Moon serials available for legal, free download? What’s better, they’re prepackaged for iPod, PSP, and DVD… awesome.

Guess what? I didn’t want to rewrite the wasp bit at the beginning of the story, so I figured I’d follow up here as an ending. Finally got serious, broke out the 10ft ladder, and did some recon on the wasps in the rain gutter theory. In just a few brave minutes of investigation, I located four obvious nests – each of considerable size. And thus began the first sortie of Wasp War 2006. I struck with vengeance, soaking the nests in foamy death spray. After each attack, I’d jump off the ladder and run for cover. Allowing time for the angry to settle, I’d then move the ladder and attack the next nest down the line. I think I got most of them, although I’m fairly convinced there are a couple more which are better hidden. Those die tomorrow, as they all do eventually.