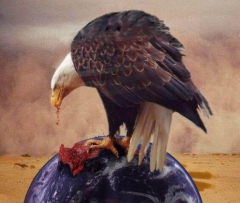 8:30pm Sunday and I just put Keaton down while Sharaun headed to Wal Mart. On a lark, I looked up “homemade brownie recipes” online, and discovered we had all the makings for a “from scratch” fudge-brownie recipe. So, not only did I change the baby and put her down, I’ve got some baking in the oven as well. After that’s done, I think I’ll scrapbook, darn some socks, and work on my needlepoint. (The joke is me doing many womanly things, if it missed you). Was a good weekend, continuing my spurt of personal productivity. I jigsaw’d the traced wolf-shaped cutouts for this years Halloween prop, mowed the lawn despite baking in the 100°+ heat, and finished putting up the last of the garage organizing leftovers from last weekend. Also managed to mix in a good bit of leisure, playing (and losing) in a pool tournament at a friend’s party, eating some awesome home-cooked Indian food at a Friday dinner with friends, and topping it all off with a swim and BBQ Sunday afternoon. Damn, we truly live a rough life…

Sorry for the long “show and tell” intro, I hate when I do that.

Although this article is over a half a year stale, I read it for the first time last week. It’s the transcript of a phone interview with Noam Chomsky about the United States and its current political situation, but the interviewer touches on other international & domestic issues as well. I found Mr. Chomsky’s comments on the war in Iraq really interesting:

…the first thing that should be done in Iraq is for us to be serious about what’s going on. There is almost no serious discussion, I’m sorry to say, across the spectrum, of the question of withdrawal. The reason for that is that we are under a rigid doctrine in the West, a religious fanaticism, that says we must believe that the United States would have invaded Iraq even if its main product was lettuce and pickles, and the oil resources of the world were in Central Africa. Anyone who doesn’t believe that is condemned as a conspiracy theorist, a Marxist, a madman, or something. Well, you know, if you have three gray cells functioning, you know that that’s perfect nonsense. The U.S. invaded Iraq because it has enormous oil resources, mostly untapped, and it’s right in the heart of the world’s energy system. Which means that if the U.S. manages to control Iraq, it extends enormously its strategic power…

Now, any discussion of withdrawal from Iraq has to at least enter the real world, meaning, at least consider these issues. …We’re not allowed to concede that our leaders have rational imperial interests. We have to assume that they’re good-hearted and bumbling. But they’re not. They’re perfectly sensible. They can understand what anybody else can understand. So the first step in talk about withdrawal is: consider the actual situation, not some dream situation, where Bush is pursuing a vision of democracy or something. If we can enter the real world we can begin to talk about it. And yes, I think there should be withdrawal, but we have to talk about it in the real world and know what the White House is thinking. They’re not willing to live in a dream world.

I wonder if any politician/leader could succeed by speaking as simply and honestly as Chomsky describes above. Instead of talking about “freedom and democracy,” just be straight-up honest with the people and let them know we’re making a strategic and calculated imperialistic gesture for the sake of extending the nation’s power and influence. It would never work, right? But… the funny thing is, when it comes to why we went to Iraq, I don’t think most people “buy” it anyway. Not the “smart” Americans; not the “dumb” Americans. The “dumb” folks are happy we’re over there “kicking some ‘cameljockey’ ass and flexing American muscle,” and think good ol’ boy Bush is secretly in league with them and their ignorant close-minded worldview. The “smart” folks have long since seen proof after proof that the country was mislead into war, and can read through the “threat level Orange” FUD rhetoric anyway.

So, who’s being fooled? Maybe it’s just easier, or more more “civil,” to talk about it in a roundabout language of positivity than to call it by its true colors. Seems somehow less glaringly bad if you can just “dress it up” a bit and not acknowledge the uglier reality.

In closing, it looks like my brother and I missed robot clones by about twenty years. We should have patented the idea.