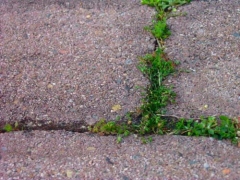 Keaton’s in her swing, wrapped loosely in a pink blanket that defines soft, watching the mobile spin above her head while hiccuping. Sharaun ran out to do some errands and I happily traded the babble of the TV for silence and some time to write. I’m kicked back on the couch in shorts and my house slippers, thinking about how I’ll do the dishes from dinner just a little later. Tuesday night, home from a busy day at work around 6pm – had to stay late to finish “just a couple” things before heading home. Every day at work I have just enough “just a couple” things to do before I leave to keep me around until morning the next day, you just have to draw the line somewhere and cash out. I’m pretty good at drawing that line in the sand and sticking to it, and more often than not it’s right around 5pm. What am I talking about?

It’s Springtime, and my backyard is a verdant bloom of weeds again, the unending rain helping them take root in otherwise non-ideal places. They blanket the unplanted hillsides that flank my house left and rear, growing in the damp mulch. They crowd the Japanese maple, blocking out the little plot of dirt I’ve been intending to plant pretty flowers in. They have taken over, and I hate them. My only solace is in the knowledge that the summer swelter will scorch their little leaves and stems; dry up the milky sap that is their lifeblood, and leave them as brittle, crumbling shells of their former thriving selves. I hate weeds.

I have this daydream thing I sometimes do, where I sometimes dream about getting stranded on a desert island (yes, I know I’ve done the island thing over and over and over, but this one’s different). It takes me as I am now, and puts me washed up on some desolate beach far away – only I’m not alone. I’m with a woman, one that’s not my wife. The fantasy really doesn’t do much else, it’s more of a setup for the line of questions that follow. I always wonder, if I were to find myself in this situation, how would my new island life with this person unfold? I’m assuming, of course, that I am a skilled enough survivalist to provide us with food and shelter and keep us alive, and we’d have each other’s company as a ward against insanity. With all the basics of life taken care of, you’re now left with an island existence, both of you living out your days together. It’s there that my mind begins to work, to twist and turn…

At some point, this woman and you would do it, right? I mean, you’re on an island, there’s nothing but the trees and waves and coconuts to eat… It may be slow in coming: you first erect a small lean-to for shelter, later you further the bond between you by perhaps bringing her a fresh-caught fish or starting a fire with a stick. She begins to trust you, depend on you even. In my daydreams, this woman is nearly always someone I know, a friend of mine or Sharaun’s. It’s all the better if, in real life, you could never imagine yourself having a relationship with the person. But, on the island, with just the crabs and gulls and wind in the palms, all bets are off. It may start as a simple compliment – how becoming her new grass skirt is; how the berries make her hair smell good. Yes, that’s where it may start, friends, but it’s not where it ends – only the island knows where it ends.

Soon, as the reality of life on the island sets in, urges turn less survivalist and more animal. Glances are cast, body language broadcast: it’s about to be on. Then, one day (yes, it’s the bright of day – that’s the awesome thing about stranded-on-a-desert-island sex, there’s no one there to be bridled for… in fact, you can be as unbridled as you want on the island), the impossible happens: humping. Oh yes, there’s no question that the time on the island would lead to doin’ it; all desert-island roads lead to fornication – I’m convinced. The bond that the island can form is a unique one, and the island can get even the loneliest of men laid… provided they can build a fire and clean a fish. You’re Screech Powers and find yourself washed waywardly ashore alongside the fetching Kelly Kapowski? No worries my friend, the thick impenetrable layers of highschool social strata do not exist here on the island. Here, you are as boneable as AC Slater. All God’s children got game on the island.

Uh-huh, I’m aware that this is nothing more than a complex construct to daydream about humping unattainable women whom I know – and I’m OK with that because it’s not as direct as simply dreaming about an affair. At least my sex-fantasies are set in impossible situations and only happen after hard-won demonstrations of manhood and survivor/provider instinct. Only if all men had to jump through such a set of pre-daydream-sex hoops – maybe there’d be less indiscriminate humping. Sharaun’s pretty much guaranteed a faithful husband unless a friend of hers and I happen to land ourselves in the remote South Pacific… and even then I have to keep us both alive long enough for the island to make her want me. Those are pretty good odds, if you ask me.

Where that all came from, I have no idea. Goodnight.

2 Replies to “on the island, all bets are off”