I was busy today scouring my folders for photos for the soon-to-be-launched “cast of characters” page, picking out good ones, cropping them, resizing them, and working them into the flow of the page. When I decided I wanted to include some older pictures (pre-digital camera era by a long shot), I busted out some old boxes from the garage and fired up the scanner. It was during my picking-through of some old school pictures that I found something that made me wanna do this late-night Sunday blog.

I have this box of old stuff from my gradeschool years. It used to reside in our extra room when we lived in Florida. We had a house where the previous owner had converted the garage into a den and spare/junk room. We piled boxes and crap in that back room, and for years that’s where this box sat. Unfortunately, the drainage or sealing of that room was not done properly, and during a particularly floody day one year, that room took on a lot of water. A lot of the stuff in the box got ruined, mildewed, and just nasty. But before I moved to California, I cleaned up as much as I could and brought it with me. I was sorting through that box today, looking for some old school pictures of myself to add to the “cast” page.

Wedged between my Bausch and Lomb Science award and a crispy/moldy 5th grade project on birds, I found one of the coolest things in the world:

This is the first “love letter” I ever got. I was in kindergarten. Man, just seeing those hearts catapults me back to when I got this thing. The scan above is the front of the envelope (you can click all the images for larger versions). As you can see, my name is not spelled right.

Here’s the back of the envelope, they spent some time on this part – color and all. I swear, I was the happiest kid on earth when I got this thing. Thank God my folks had the presence of mind to save this. I can almost feel how good I felt when I got it. Oh yeah, did I mention it was a love letter from two girls? Apparently their names were “Christy and Shelly.” Now, I looked hard for my kindergarten class photo, but couldn’t find it. If my memory serves me correctly though, these two foxes looked they were in at least the 3rd grade. Once a pimp, always a pimp… (they still got the name wrong though)

Inside the letter was another “handmade” envelope. Again, some time was taken on this one. Looks like this might be from Christi alone, and it also looks like Christi was kinda dumb / kinda smart. Why do I say this? Well, she’s now taken to spelling my name correctly, but she’s forgotten if her own name ends with a ‘Y’ or an ‘I.’ Seems she has been completely mentally obliterated by her love for me, and is clearly losing her mind with lust.

Inside the inner-envelope, was this piece of notebook paper. Now Christy has gone back to the ‘Y’ spelling, and my name has once again reverted to “Daivd D.” That’s OK, because there are like four-thousand hearts on this page. There are even hearts that have hearts inside of them. Some of the hearts have been cleverly turned into balloons, and either Christy or Shelly had the shakes, or there’s confetti flying around. Also, there are what appear to be water spots on the note – which leads me to believe that their emotions were so strong, these poor girls were actually sobbing while they wrote this letter. This is for real love, y’all. 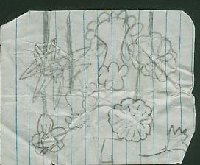 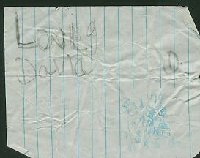 Also inside the inner-envelope, a very small scrap of paper with yet more admonishments of undying love. I don’t know if it matters which side is “side one” here, so I’ve shown both of them. The left one seems to have some intense imagery, including what I make out as a sand-dollar, a ninja star, and a flower. In reality, these are all supposed to be flowers – but hey, we were in kindergarten, and these girls were most likely super hot for five-year-olds (we all know brains don’t get handed out on the same day as looks). On the flipside, we have a simple message: : “Lovig David,” there’s a nice blue stamp there too. Ahh… this was the best day of my young life thus far.

Well, there ya have it. My very first love letter. Reproduced here in all it’s awesomeness. I’m really glad I could share it with you. I honestly can almost remember how good it felt when Christy, or Shelly, or Christi, or both of ’em, came up and gave this to me. I was ecstatic.

Christy and Shelly – thanks for the confidence.