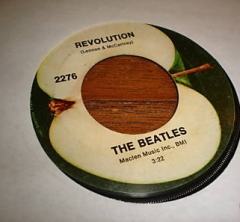 Monday night and I’ll kick off this music-centric entry with a prayer:

For the first time since I discovered Beatles bootlegs, became a fervent collector, and eventually amassed all that there was to hear (quite truthfully), and then quit the game once the unreleased material dried up, you have blessed us fanatics with something truly amazing. As always, I am in awe of the work of these sonic wizards, and I thank you for bringing new material to the forefront.

Blessed be the well-oiled and poorly-secured doors on the Apple vaults.

No but seriously, last week one of the holy grails of unreleased Beatles’ material leaked out to the web: the full eleven minute “take 20” of the White Album track, “Revolution 1,” which is the slowed-down, mellowed-out original version of the heavier (and more familiar to most) “Revolution” released earlier that summer in 1968 as a B-side to “Hey Jude.” This take is described in Beatles recording session expert Mark Lewisohn’s incredibly detailed book, Complete Beatles Chronicle, with the following entry:

A session of unusual overdubs and experiments for “Revolution 1” 2:30pm-1:00am.  John re-taped his lead vocal – and, attempting to alter his voice in some way, he lay flat out on the floor of studio three while doing so.

Paul and George added a persistent backing vocal that went along the lines of “Mama Dada Mama Dada Mama Dada” towards the end of the ten-minute recording, Ringo added some percussive clicks, John a tone-pedal guitar part, Paul an organ part and the group then spent some time creating two tape loops, neither of which was used.

A rough mono mix of take 20 (which was a reduction of 19) and an additional copy of this made at the end of the session were taken away by John and one other person (unnamed on studio documents).

So there you go. Fifty years later that “additional copy” made for “one other unnamed person” has made it onto the internet. One of only two copies in the world, the other presumably still locked away in the studio gathering dust. Tip o’ the hat to you, unnamed person.  Too bad that I am, in all likelihood, celebrating the passing of unnamed person – as I’d be willing to bet that was the catalyst for a changing of hands, or sharing without repercussion, of this tape.

And, before I continue this essay on the new tape, I need  to wax a bit about the current state of the bootleg “scene…”  Please bear with me (or, skip three paragraphs ahead if you simply can’t).

While I’ve been away from the “Beatleg” trade for years now, I do still follow what small “development” there is in terms of new material, new labels and players, and what may be on the horizon. With most of the old-school European bootleggers now IFPI’d out of business, all physical production has moved to Japan. I have a hunch that most of the material appearing is still coming from the same European and US “sources,” but that it’s just too risky anymore to print the physical media in that arena. Besides, the internet has marginalized the market for physical bootlegs. Sure you’re still guaranteed the collectors who want the physical discs – but you don’t have to seek them out in order to hear the material, as the new generation will just wait until they are digitized and put on their favorite tracker to download.

Funny enough, hardcore bootleg addicts being a peculiar bunch, it’s not a surprise that there’s a growing “rip opposition” movement amongst the die-hards, in which they promise not to rip the discs and post them on torrent trackers for the world to hear. This somewhat anti-sharing, reveling in exclusivity snobbery is classic Beatleg hoarder behavior… so it’s not unexpected. After all, he who has the rarest cut wins.

And so it is that I’m here listening to this amazing piece of history, five minutes into an eleven minute descent into John & Yoko tape-loop madness. I can remember the stories I read as a teenager, how John had taken some of the “stranger” bits of the extended “Revolution 1” sessions and warped, reversed, and wrecked them into his music-concrete stunner, “Revolution 9.” “Revolution 9,” the track that I used to be scared to listen to in the dark. Seriously. And, in this brilliant new leak, you can hear the elements John used to craft that piece of “musical” nonsense. The bassline Lennon buried as the “drive” for his piece, the tape-stretched and effect-drenched yelps and whoops, it’s all there. But here, in this take of “Revolution 1,” it’s still musical.

And, I’ll be honest, I listened to it at least ten times this morning, over and over and over. Hearing pristine new Beatles audio like this hasn’t been an experience I’ve had in a good while. Not since the “Hey Jude” sessions leaks back before Anthology have I been this intrigued with a new leak, nor has there been a leak this significant.

Well, I suppose the Sgt. Pepper multi-tracks were about equal in importance, but you don’t get the gravity of hearing “new” material with them – just the underlying 4-tracks of songs you’re already intimately familiar with. That said, to me the availability of this recording trumps the Pepper multi-tracks in terms of sheer enjoyment derived from listening.

I got into a bit of an academic discussion about the track with Ben today… the only one I really know who can stand to get “academic” about music, other than a close buddy in Florida who wasn’t online at the time and doesn’t quite share my Gods-on-high view of the Beatles. I shared the track with him and he queued it up at work for a listen. His reaction interested me, as he remarked something like, “This is very shoegazer-ish, just epic. Goes on and on and on and on. Like a Ride song. This track is downright great. Love it.”

At which point, I got on a favorite soapbox of mine and tried to explain how, listening to stuff like this now, with our modern appreciation of music, it’s hard to imagine just how groundbreaking and ahead of its time it was back in 1968. I tell this to Sharaun all the time when she says things like, “Yeah, the Beatles are good, but I don’t hear why people think they were so revolutionary or groundbreaking.”

It’s all well and good to say something like that having had the luxury of hearing all the areas music has managed to explore since the Beatles were around. What they invented, modern music has emulated… so without going back into the past and unhearing what those musical seeds blossomed into post-Beatles it’s virtually impossible to hear the stuff as one would have then, that is – in a context all its own.

Anyway, I make a similar argument to Ben, saying how, at the time, some of the more inspired bits the Beatles did stood wholly on their own ground, without reference and completely new unto the world. He agrees with me, and we both wonder at how some of the interesting techniques were achieved in the pre-digital world. Before Pro Tools and Cubase, the kind of stretched and warped vocals Lennon gets on the recording were done completely manually, pressing pencil erasers to running tapes, feeding microphones through hand-built effects pedals, physically cutting and looping tape (yes, with scissors and tape). We both bask for a while in the combined glow of the recording and our hipster music-nerd pomp, and close the conversation by agreeing that it’s like someone travelled back in time and anonymously dropped a copy of Nowhere at Lennon’s flat.

Yeah, it really is that advanced. I know, after all this you might want to hear it too, right? Well OK, here ‘tis. Enjoy.

And now that you’ve heard it, you’re free to accuse me of gushing over nothing. But you have to understand where I’m coming from, the history of the matter here. What’s that, you don’t really understand the history? I’ve never told you the history? Oh man… this is… big.

In fact, now that I think about it, I’ve written about bits and snatches of my history with bootlegs over the years, but a quick search of the blog annals shows I’ve never tacked a concise overview of how it all started, how it all got just a little bit out of control, and how it arrived where it is today.

But, I’ll get to it tomorrow, as I’ve already written a ton today.  Hope someone enjoyed it, take care  – I’m off to the gym (but not before I load up this new leak on the iPod for some more ear-time).

3 Replies to “before pro tools and cubase”