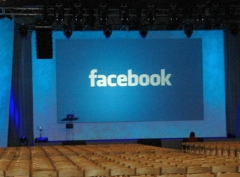 Since then, I’ve been demoted to fourth place.  Keaton, New Kids on the Block, Facebook, and then me, laboring along trying to catch up and bringing up the rear.  That’s how the race is shaping up.

Over the years, I’ve always managed to stay away from the social networking thing.  When MySpace was the jam, I chose to abstain.  When Facebook’s more “college” clean and neat look became so obviously better than MySpace’s “highschool kid” clutter and everyone jumped ship, I kept my distance.  Friendster, no sir.  Bebo, heck no.  And, when every person I’ve ever worked with, all the way back to the skeezy dude who slammed lines on the prep table at Subway when I was 16, asked me to join them on LinkedIn, I made a special e-mail rule to send the requests directly into the bin.  “No thanks,” I thought.  The blog right here has always been enough “putting it out there” for me.

People have come to know of my social networking resistance, and chide me for it.  I’m too good for it, they say.  Too cool.  Think myself above it.  Am just reveling in the “coolness” of being the last holdout.  I’ve heard it all.  I dunno if it’s something like that or not, but I do kinda get a kick of someone asking, with a touch of incredulity, “You’re not on Facebook?”  In fact, people have gone so far as to send me articles about Facebook.  Here’s one of the best: “You Have No Friends. ”  After you read it, I bet you’ll be almost convinced you should join… I was.  Almost.  (Who am I kidding, I’m sure you’re already ‘bookin’ with the others.)

And so it’s come to pass that I, a social networking virgin, have watched my wife lift that pipe to her lips and draw deep – and end up hopelessly addicted from the first hit.  It’s been a measley two days and she’s strung out on the thing like a Facebook junkie.  Each night I get to hear about who she “found” that day, get to share in the rejoice as lost souls from the gradeschool-chum milk cartons in her mind are found alive and well, working in Des Moines for the school district.  Hey, did you hear that awkward skateboarding kid from Bible Camp is a fireman and noted philanthropist in Boston?  Dude, Dylan is a roughneck?  Wonder how he ended up in that line of work.  OMG, Amber is totally into chicks!

I gotta admit, it all looks a bit fun.

Not quite fun enough that I’m compelled to sign up for myself, but there is a certain appeal to seeing pictures of things you remember from the past (Tuesday’s entry, anyone?).  I suppose, now that Sharaun is on, I can kind of peek over her shoulder now and again for my own secondhand-smoke fix.  Can surreptitiously stay caught up on who went to the dentist, who just got a new Jeep, and whose kid is in swimming lessons via the nightly Facebook status reports.  I’m sure soon she’ll put it on her iPhone and I can get updates at any and all times.

So, if you see my lady in and around your Facebook area… can you spraypaint on her fence or whatever and let her know I’m gonna be gone for an hour or so up at the gym and Keaton’s running wild in the backyard?  Thanks; I can’t get her to turn her head from the dang screen.

2 Replies to “bringing up the rear”