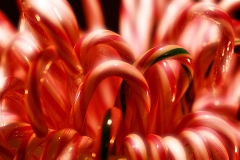 Another blurringly-busy day at work today. Tonight we again had dinner with the older couple we know from church. We talked of B17s and bombing sorties over Southern Germany; of riding motorcycles around the makeshift hangers on a unassuming US airstrip in England, the hangers covered with brush as camouflage; of French pistols, the spoils of war; of flack from anti-aircraft guns at 30,000ft; of breaking formation to dodge scrambled German props. Unbelievable evening, had a great time. Was still in a writing mood when I got home, so for Friday I’m gonna get a little blue (OK a lot blue). Some scenes I remember, and quotes to go with them.

Scene: Boy in his room, showing a friend’s girlfriend something on his computer. There is a small group of people outside on the back porch, the boyfriend of the girl is one of them. She’s petite, her body tight and and small, making her look younger than she is. The boy perceives a signal, subtle body language – he makes his move, there is no protest. His hand moves under her shirt, along her side, up to her bra. She moves against his touch, providing “go ahead” pressure as his hand trails along her soft skin. No underwire, not much filling the cups but he doesn’t care, he’s dizzy in the moment – so risky, so exciting. Pushing aside the satiny fabric, he traces, pinches, pulls and pets.
Quote: “He’s right outside… No. Don’t stop. I’m so horny. Do you want to go somewhere?” “I can’t. He’s right outside.”

Scene: Boy and girl at work, it’s a Sunday in the mall and trade is light, there is plenty of time to talk and flirt. As the three-person shift progresses, the boy, who is the assistant manager, sends the third employee to the floor. He and the girl are left behind the counter, this is by design. She is younger, not “tight” or “petite” at all, rather healthy and amply bosomed. She has blonde hair, he thinks it may be fake, but he doesn’t care. The small flirtation continues, he’s always considered himself good at this game, and his conceit is confirmed as things seem to be progressing well. This is unusual, as he usually waits until success is all but a sure thing before making a move, this time he’s just forging ahead blindly. At the end of the day, he gets to choose who “closes” with him, he gets to send the other one home. He’ll count the money, note the total in the book, he’ll enclose the comparative running total as compared to last year in <carrot -parentheses>, it’s always negative compared to last year. He’ll put the money in the safe, she’ll be vacuuming the sales floor. Yes that’s his plan, and he’d successfully execute it later, but for now they stand behind the counter. He decides to be bold. His hand touches her leg through her pantyhose, there is no protest. Bolder still, he uses the midriff-high sales counter to his advantage, pushes up her black dress and moves inward on her thigh. There are are customers in the store, but to them the two torsos behind the sales counter are simply standing there. He reaches his goal, bolder than ever now.
Quote: “When are we going to fuck?” “I thought you’d never ask.”

Scene: Boy and girl sit in a car, he in the passenger seat and her in the driver’s. It’s her car. The boys arm stretches across the stickshift, his hand disappearing under unzipped jeans and polka-dotted cottons, working. It’s his first time inside her car, his first time inside her. They are both nervous as hell, their leaned-in kisses awkwardly twisting their bodies across the gulf of the parking break. She pants, but protests.
Quote: “Let’s move to the back seat.” “I can’t, not now.” “Just let me taste you, I just want to taste you.” “I can’t, not here.”

Scene: Boy at girl’s house, her parents are out of town, it’s the Fourth of July. For the longest time, he’s thought things could be “on” between them if he only made a move. He’s deathly afraid, she’s harder to read than any girl he’s previously courted. Boy has been trying to win back an old girlfriend, but it’s not this girl. This girl is small, petite, tight. She’s not the same small, petite, tight girl from the computer chair. All evening, he’s on the edge of making a move, on the edge of making a mistake, on the edge of faithfulness. She’s wearing one of those “at home” outfits that girls, particularly cheerleaders, wear when they want to entice boys: a tight-fitting pink tanktop with thin straps and short, short pants made out of grey cotton. He’s pretty sure he has permission, but he’s got a case of morality. He tries to leave.
Quote: “Please don’t leave, stay the night here tonight with me.” “I can’t.” “Please, I’m scared of the noise, the fireworks, you can stay with me in my room.”

Scene: He’s tutoring her, in math. He lays on his bed, she sits with her back to him, against the bed so he can look over her shoulder and see her book, equation, and work as she writes. He corrects her, gives her helpful hints and little explanations. The parabola opens upward if the slope is positive, she nods. She’s dressed for soccer practice, jersey and white Umbros, he can see through the white Umbros: striped panties, like a rainbow candycane. Her long blonde hair reflects the light in strands, it smells otherworldly as he peers over her shoulder. She gets it right, x=7, he reaches around to put his hand on her chin, he turns her head. Her skin is ghostly pale, he loves it, her legs gleam like alabaster pillars, her thighs like fresh cream. She turns her head, her eyes are already closed, her lips, so thin and pink, are presented and at the ready. They kiss, her tongue is pointier than he’s used to. She’s stunningly beautiful to him, so innocent.
Quote: “Sharaun is my friend.” “I know.”

Scene: Two young kids in the back of a car, clothes completely off. The car is parked in an open field in the woods. A field which, years ago, used to be the “parking” part of a drive-in movie theater. The teenagers grope, fogging up the windows. It’s cold outside, but warm humid in the car. The air smells of perfume and sweat and dried saliva on naked skin, and things are heating up. The girl is a virgin, the boy has two notches on his belt. Things are heating up. The boy knows he’s not getting lucky tonight, not in the strict sense of the term, but he does have a plan. He asks the girl if she wants to see something she’s never seen before, and in her best shy-excited voice she affirms she does. He says it’s nearly time. And that’s how two naked kids found themselves standing outside a car in the freezing darkness, the girl manipulating the boy, working to see something she’d never seen before. Their breath comes fast and ragged, accelerated by the moment, heavy with anticipation. The boy gives one final warning, then rocks up onto his toes as his muscles tense.
Quote: “It’s so warm. Is it always that warm?” “Yeah, always.” “I want to do this again, did I do it right?” “Yes, you did it perfect.”

7 Replies to “setting the scene, quoting the players”