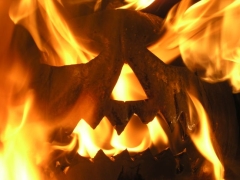 Halloween this year was ultimately frustrating. From the moment I got home, things went wrong. There were literally (literally!) a group of kids running around my yard a good 30min before dark, just projecting that Halloween anticipation.

And it was with that example of youthful expectation fresh in my mind that I set about getting things dialed in just right for the evening’s parade of candy-whores. First up, I had to fix the dangling blacklight that illuminates the crank ghost, as it had fallen (for the billionth time) off of it’s ceiling-mounted screws. While up on the ladder in the fading daylight, I noticed that the crank ghost herself had gotten wrapped up in her motor pretty badly – so I untangled the mess and set her straight. Next it was off to get the witch turned around to face her spotlight, as the wind had spun her around and had her facing the wall. A witch’s back is a lot less scary that her wart-nosed profile.

Next up, PicoBoo’s connection to my speaker was touchy and every once in a while would vibrate loose and emit an unbearably loud buzzing. Fixed that, and came back out to find the ghost – now working under motorized power – had spun herself right up into knots again, and with the motor driving, had completely bent her rotating puppet arm. Beyond repair, I unplugged the motor and settled for a static prop. Finally, after about the 3rd sortie of trick-or-treaters, the string controlling the ceiling dropper snapped right in two. I had no option but to clumsily break out the ladder and attempt to do nighttime repairs while the kids were forced to maneuver around me. After several minutes of cussing and swearing and sweating, I had a rough working fix that would have to suffice.

But despite all the drama and prop-fallout, things went off OK. Once again, we had a pitiful turnout, handing out candy to what I’d estimate was about 25 total trick-or-treaters, and that’s a generous accounting. So, the night itself was somewhat of an anticlimax… but I still enjoy the holiday. Moving on from Halloween then…

Lately, I’ve become quite enamored with the “Deep Tracks” channel on XM radio. I don’t pay for XM, but I get a pretty sizeable chunk of their offerings as some freebie piggyback on top of my DirecTV. My old buddy Kyle has been telling me now for two years that “satellite is the future of radio, Dave,” and maybe he’s right. Still though, I don’t want to pay for radio. And even though my “free” XM doesn’t come with anything as hip as Sirius’s “Left of Center,” I’m really into the unique tracks they seem to play on “Deep Cuts.” No, I wouldn’t pay for it – but to hear things like a Leon Russell cover of George Harrison’s “Beware of Darkness” is kinda refreshing.