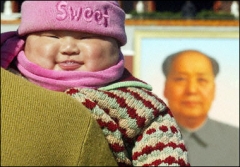 Happy Halloween friends! Welcome to another mundane Tuesday where, in real time, I’m likely already sitting at my desk lamenting the eight or so hours of work that lay before me. At least tomorrow I can, for a short time, escape the stupid humdrum of work and experience some happier times while scaring kids and giving out candy. Then, I take it all down… the motorized ghost, the coffin, the tombstones… I take it all down and store it away for another year. After that, I’ll focus on Thanksgiving and Christmas… because, after all, I guy has to have something to look forward to. Now then, let’s get around to this blogging business, shall we?

Keaton’s second tooth is just crowning, and I think it’s causing her to be a little cranky. She’s also spending a lot more time “scooting” around the floor and “raising up” onto her knees – like she’s showing us she’s almost there, teetering on the edge of mobility. I get so excited when I see her move herself around, but I also get kinda sad to think she’s changed so much from when we first met just a few months ago. I mean, we’ve not even had the pleasure of each other’s company for a year yet and she’s changed more than anyone I’ve ever known. She sits up, she ba-bas and ney-neys and ma-mas, she eats food… she’s too big.

Last week, mostly due to the furious preparation for our Halloween party, I forgot to mention to Sharaun that Jeff had told me he’d read in the paper that tickets for Justin Tenderlegs’ upcoming show here in town were going on sale this past Saturday morning. (Is that a run-on?,sure seem like a run-on…) Anyway, she’d been wondering, and had been checking daily online to ensure she wouldn’t miss the onsale. Well, she did miss it, like I said, because we were both preoccupied with party prep, and she was completely bummed. Now, for me, missing a Tenderlegs onsale wouldn’t sting at all, but for her it was a source of profound grief. The situation became worse when it was revealed I had know, and neglected to inform her, of the early morning post-party onsale. Moving forward though, she tuned into one of the local radio stations to see if they were giving away tickets; they were. About three hours later, she had, of course, won a pair by being the designated caller. This win brings her 2006 radio contest tally dangerously close to the-IRS-might-wanna-know earnings. Concerts, shopping sprees, iPods, Xboxes… you name it she’s won it. I don’t know quite how she does it, but I think it’s awesome.

Figured out my stereo-only-on-the-right-speaker thing tonight, turns out I’ve got a dodgy connection on the back of the TiVo. A little plug jiggling and all was well. All that for a loose connection. And to think, I almost went out and bought a brand new 60″ flatscreen because of it. Glad I didn’t, because the rear brakes on the Ford (the ones I didn’t ever change even though I’ve been planning to for weeks now since I changed the front) are making some God-awful scraping sound in both braking and non-braking situations. I have no idea what this is, but the sound tells me it’s not something good. I plan to at least change the brakes and see if that helps, but if not… who knows. And, now that that’s all over with…

Don’t forget to pop over to the Halloween costume contest leaderboard and see who’s ranking highest… If you’re not happy with the results, go and change ’em by casting your own vote.

2 Replies to “buy her a lottery ticket”