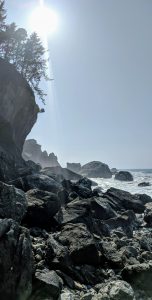 We walked down to the sea today.

We did so on the way back from a longer walk around a good portion of the grounds here at the state park. That walk itself came after quite the bustling RV morning, including the momentous first day of home-school for the kids & a father/son bike ride.

Momentous as it all was, and it really was, in the grand scheme, it was being beside the ocean that I’ll ultimately take from today. I told Sharaun, who stayed safely just above the closer-to-the-crash rocks the kids & I clambered down to, that I could sit there and stare at the bubbling foamy chaos for hours.

So rough. The rocks taking beating after beating. The waves, unrelenting, smashing at them over and over again, throwing huge plumes of spray into the air and filling the little nooks and crannies of the rough shore with froth. Occasionally a swell of the tide would see the sea cover entirely over all but the most massive upshots of rock, making them temporarily disappear underneath boiling swirls of white.

It was chilly and there really was no “shore” to speak of. The mountains simply crumble into the sea, quite abruptly. You can look back a hundred yards from where you climbed down and see a redwood forest and ferns. The ocean has literally beaten the cliffs into a tumble of rocks.

It was fantastic for every second of the twenty minutes or so we spent there before heading back to the RV for dinner. Ever-changing, almost hypnotic, kind of like watching a campfire or a snow fall.