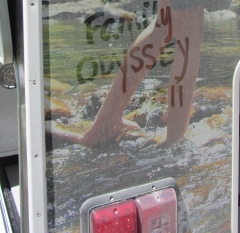 Well folks, we’re back home after our extended jaunt.

I won’t spend a lot of time waxing about how great it was (it was) or how well-behaved we all were with each other (angels) or how I feel more American for the experience (Semper Fi).  Instead I wanted to write about being home.

We rolled up Tuesday afternoon and worked until late that night just unpacking the RV.  Moving load after load of our road-things back into the house – not putting them away in their proper places, mind you, just facilitating the exodus.  Wednesday we rose early and began the arduous process of cleansing the vehicle before return – a process which reminded us both of the old apartment days, facing that “how much do we need to clean?” quandary.  One final sewage and wastewater dump and we had the vehicle back on time.  It was an odd feeling, dropping it off for good again… and the resultant move-out piles are still only partially dealt with.

Sharaun has said to me several times that she’d have been ready to do another six weeks, not come back for double our time away.  I have to agree, although being home is nice.  We took the homecoming mass unpacking as an opportunity to do some spring-cleaning and organizing (something the OCD in me adores).  Having a few days off before returning to work, I had a small list of minor projects I wanted to run-through and have been able to make good progress.  Yes, it’s good being home; I love our house.

And yeah, I’m slowly beginning to peek at work stuff.  I re-downloaded the corporate email app to my phone and have been doing sporadic replies to new threads.  I’ve batch-downloaded everything which came while we were out and halfheartedly parsed through it once or twice.  I had lunch with my coverage guy and good buddy and used the hour to poke a bit about what’s been going on.  You might say I’m thinning the cobwebs, but I guess it’ll be a week or so before I’m back firing on all cylinders.  From what I’ve seen, things for the most part went as things tend to go…

And with that quick summary I’m off to enjoy the day & kick around on Keaton’s last couple videos.  Until Monday for the blog, take it easy.

One Reply to “homecoming”