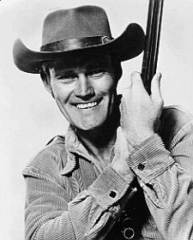 Stupid weekends are never long enough.  I needed this one to deliver, too, as I couldn’t quite push work out of my head in the alloted 48hrs.

I’ve been watching a lot of old episodes of The Rifleman with Chuck Connors lately.  One of the original western serials, AMC has been playing it, in its original airing order, in fantastic-looking HD at like 3am on Sundays or something.  I’ve been DVRing each episode as it runs, and Keaton and I have started to enjoy watching them together.  Sharaun, at first not too happy with how “appropriate” Western shoot-’em-ups are for kids, has relented after watching part of one with us and realizing how awesome they are.

There is a lot of shooting though, she’s right about that.  Like a any five year-old kid back in 1958 could, though, she’s able to tell the “bad guys” from the “good guys” and she doesn’t seem too disturbed when Lucas and Micah have to off some bandits for the good of North Fork.  One thing about the show that I find curious is how if often ends with McCain killing the bad guys.  You’ll get twenty-eight minutes invested into the show, Lucas will shoot three or four scruffy-looking ne’er-do-wells, their bodies will laying strewn about the street at the center of town, and he’ll clap hands with the marshal, smile, and offer some show-capping comment.  Despite the fact that there are people just feet away bleeding to death and full of lead, the show never fails to end “happily.”

Let’s hope that the gunfights of my last couple weeks, and the corpses left in the sawdust to be dragged away, tie-up just as nice and tidy as those days in the New Mexico territory.  I could use a neatly-resolving ending where I ride back to the ranch and live to fight another day.