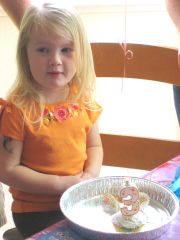 Appropriately, Zeppelin’s “Rain Song” has shuffled up on the iPod.  This song always reminds me of walking to Robin’s house from mine, back around 8th grade or so.  My first real girlfriend.  Keaton’s got her head on my lap and I’m trying to pretend these stupid apple slices are as good a “snack” as the leftover piece of pizza in the fridge would be (being a salty-carbs-over-sweets-anyday guy, fruit as snacks just doesn’t cut it).

Sharaun’s been gone most of the afternoon, first at a baby shower and now at the the gym (where I’ll be later, I think).  That means I get a lot of time with Keaton.  OK so she napped for most of it, and I for a good bit too, but we did get some time hang out.  Keaton knows that Dad’s not much of a TV guy, and that when we’re home together (and whenever he can get away with it, really), he’s got tunes on rather than the television.  And lately she’s been asking more questions like, “Daddy, what are we listening to?,” and “Daddy, what band is this?”  For me this is simply thrilling; I love it.

So much so that I started teaching and quizzing her today, trying to see if she would repeat back the groups I’d name for her.  I was having so much fun hearing her exclaim things like, “But beetles can’t talk!,” and, “Butter-feel band,” (no, she seriously said those things) that I got out the iPhone and recorded the following exchange.  Thought it was worth posting, so here ya go:

[audio:PFloyd.mp3]
Talk about leading a guy on only to crush his fragile heart in the end!

Oh, and, did I mention that Keaton had her big three-year-old birthday last week?  No, well she did.  Prompted by that event, I think, I added some new pictures to her gallery.  Make sure you head over there and check out what’s been going on in Keatonland for the past couple months.  Here’s the link, enjoy.