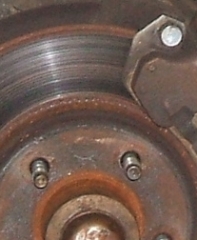 Happy Monday folks. Finished up the weekend’s yardwork today after real-work, now just have to mow. Supposed to rain tomorrow though, so I doubt I’ll get to it before Wednesday.

For a while now, the wheels on Ford have been making all sorts of groaning and squeaking noises which I interpreted as a plea for new brakes. Having an interest in working brakes, I decided last week to get some new pads and change them out. However, once I had the car on stands and the rear tires off (to me, the noise sounded like it was coming from the rear brakes), the brakes looked fine, 80% at least. Thinking I misheard the rumblings of protest, I put the rear wheels back on, jacked up the front end and took those tires off. I was dismayed to find both brakes there also in good shape. Pads fine, rotors fine, nothing amiss that I could see (with my finely tuned automotive eyes). Reluctantly, I put everything back together and dropped the thing again. Lo and behold, the squeak and grinding are gone. Whatever I did, my massive mechanic skills solved the problem like magic. I am just that good.

Hmm… here’s one of those awkward transitions I’m so good at.

I remember working at the music store back in college. We got a promotional copy of the Smashing Pumpkins’ Mellon Collie and the Infinite Sadness almost a full month before it was due to hit the streets. Having loved their previous album first track to last, I remember freaking out when I pulled the ornately decorated double-disc set from the just-delivered box of promos. At the time I hadn’t yet been “promoted” to assistant-manager, and I was just a floor-walking worker (which is really what I was as an assistant manager anyway, but with the power to do refunds, balance the books, and close or open the store).

I can remember begging Bob, my one-time manager and now long-time friend, to let me take it home for a few hours so I could dub it. In the end, he granted me a two hours outside the store with the set – with instructions to be back with it on-time. Not knowing how hard he would hold me to the time limit, I raced home and used two separate tape decks to simultaneously record a copy of each disc. I got back to the store with the promo in-hand in just under two hours, including driving time.

And, for the next three-plus weeks, I wore those cassettes out. The album was brilliant to me at the time, almost entirely good and so well fit to the mood and activities of the day it was as if it were tailored for my life at the time. Jeremy was living with me at the time (I know that means nothing to those of you who have no idea who Jeremy is, but he was a good highschool buddy who moved into our converted-garage bedroom for a few years), and I can remember driving around rocking out to the songs when we should’ve been in class. We had morning classes, and we’d always wake up with the best of intentions, but we’d often end up stopping for a heart-hurting southern breakfast instead.

After breakfast, we’d often take long window-down drives along the river with the music blaring. There was this little park just off the river we’d stop at to, believe it or not, swing on the swings. No, I’m serious. I love swings, always have, always will. Even now, when I see swings that’ll hold me, I’m on ‘em. We’d swing for an hour or so, discussing the important matters of the day: If I thought Sharaun and I would ever get back together (we were on a “break” at the time), how community “college” was a complete and total joke, and how we’d get together one day in twenty years with our kids for a backyard barbecue.

It’s funny, actually, that I picked this fragment of an entry to work on today. See, a bit about my blog writing/filing system: I often log on and capture bits and snatches of ideas into what WordPress calls “draft” files. Sometimes these are just a topic idea, sometimes they are stray paragraphs or bulleted lists, and sometimes they are fully-written entries that just need cleaning up (such is the case with the “porn in the woods” topic from last week’s You Decide Friday poll, but no… you guys made me write original content). Anyway, I’ve long had this draft about the Smashing Pumpkins’ Mellon Collie album, and the progressive list of thoughts in there went “Mellon Collie -> swinging with Jeremy -> reunion BBQ with families.” So, I think I managed to cover all that business. And, I’m still looking forward to that BBQ…