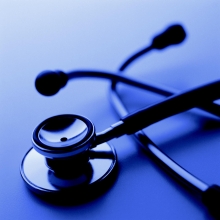 Monday was a particularly productive day for me at work. The timing of the project I’m currently working on is way in the future, so most of the tasks I have now are planning-centric… and I’ve been using the benefit of time to do some experimenting along those lines, firming up the way I forecast and ready the team for what’s coming down the road. I know, without me telling you what I do it’s hard to know what that means – but, them’s the breaks folks. Anyway, I feel like I almost made up for a week gone in a single day… Because, when I want to, I can be super productive like that.

Now I’m sitting here listening to some Sabbath (courtesy of the iPod shuffling it up) and writing. I had Keaton tonight. Got to feed her dinner, give her a bath, sing her a bedtime song, say her prayer with her, and put her to bed. She didn’t nap today so she was super tired, but before I put her down she managed to say, in her little half-asleep croak of a voice, “Sing a sun song, daddy?” “The ‘sun song?,’ I asked.” “Yeah, sing a sun song, daddy?” “I don’t know the sun song, baby, can you sing some for daddy so he can hear it?” “This one, daddy: ♫ Please don’t take my sunshine away ♫.” I immediately knew the verse, but couldn’t place the song. It took me a minute, but I eventually broke into ♫ You are my sunshine, my only sunshine… ♫, and stopped to say, “Is that the song, baby?” “Yeah,” she said, and nuzzled into my shoulder. ♫ You make me haaaapy, when skies are grey… ♫ Awesome, I’m telling you… straight-up awesome.

And, since I’m already on about babygirl…

Sharaun took Keaton to her two-year pediatrician appointment today, and asked about several things which’ve been on our minds lately. #1, the stuttering thing (which, by the way, is back again, with a vengeance): Bottom line, the pediatrician said she sees “no cause for concern.” She said she’s already noted Keaton as “advanced language ability” (finally, some corroboration for Sharaun’s my-baby’s-a-genius stance), and suggested that her vocal “hesitations” are more than likely her response to a stall in development that her mind doesn’t understand, and is compensating for. In other words, she seems to think pretty much what I guessed at a couple weeks ago: that baby girl’s vocal chords are just stalling in an effort to catch up with her brain, which has developed beyond them. Not the most scientific explanation, but it works for me. The doc said she’ll continue to monitor it and see how it goes, but that she expects it’ll go away of its own accord eventually. Whew. That really is a relief to me, no matter how much I said I wasn’t overly concerned.

#2, We also informed her of the we’re-the-parents call we made to suspend indefinitely her recently regimented breathing treatments whilst in Mexico. While we made the decision together, I was the one pushing to abandon the treatments. I just got too itchy about having our two-year-old inhale atomized steroids twice a day for what I, for whatever reason, viewed as dubious benefits. I convinced Sharaun to stop giving her the treatments, and her wheezing (which the pediatrician readily admitted was most likely caused by a bug she had, and not some underlying malady) didn’t return. Sharaun said the doc actually applauded our use of parental judgment, and said she agrees with our decision and Keaton seems fine. For some reason, that flexibility and non-attachment to a “prescribed” remedy impressed me. Anyway, we felt like we’d done the right thing – which was not so much a relief as it was a nice vindication of our motivations.

And, #3, some odd breathing patterns we’d seen in Keaton while she slept. Seemingly abnormal things like her getting into a two-deep-breaths / no-breaths-for-ten-seconds rhythm instead of a normal regulated breathing pattern. I had feared this might be related to the whole “breathing” issue thing (which has actually now gone away), but the doc assured us abnormal breathing is normal in kids at this age. Which, again, helps to support my theory that being a pediatrician is about like being an HR representative in that there are no concrete answers to anything, and nearly everything is pretty much “normal” and/or “OK” depending on how you look at it.

Anyway, overall it was a reassuring doctor visit, which I take to mean all is well, or that we have a complete charlatan of a pediatrician. Fingers crossed for the former, eh?

Oh, and before I go – I wanted to include a quick image of what some sounds familiar reader at work considers funny. Below is the name plate thingy in front of my cube (last name blurred for safety… or something), done in tribute to this entry I posted a week back. Funny stuff: 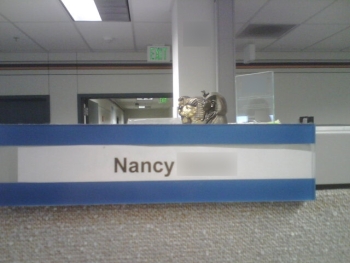 See all those little pharaohs up there? Yeah, that’s gotta be my desk.

Well folks, that’s it for tonight. I’ll be back tomorrow with