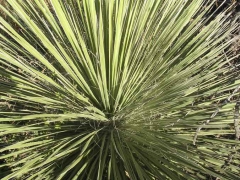 Another day at the fount-of-busy that is the sawmill. It’s hard for me to believe that this was only my third day back, like being dropped into a jungle thick with undergrowth and having to machete (as a verb, mind you) my way out. Stupid work, where’s my warm-up time? Where’s my trial-run? Where’s my mulligan? Anyway, I feel like I’m kicking butt. And, despite having had to go back to work to get that feeling – I kinda like it. You just don’t go home from a long day sitting on the couch reading a book thinking, “Yeah, I kicked ass today.” Then again, the ass-kicking means nothing to no-one, in the long-run. There, I think that’s sufficiently pro’d and con’d as per my style – never say anything, stay on the fence, the non-committal commitment. What?

Sometimes I wonder about people reading this blog. Do I know them? Do they know me? My stats tell me I also get a “decent” amount of daily traffic. I mean, check it out, here’s a snapshot of my daily traffic numbers over the past week or so:

Surprisingly, this graph says that sounds familiar averages between sixty and seventy unique hits a day. This is exciting to me. Sixty people a day? Who the heck are all of you? I know I get the random Google or Yahoo-referred visitor, who likely only stay to read what they came for and then move onto the next stop on the internet, and that these visitors can add up… but still, that leaves some percentage (I bet greater than fifty percent) of those ~sixty daily visitors who are real readers. Maybe not repeat readers, the basic stats package I have doesn’t go into that much detail (and even when I had StatTraq installed it wasn’t easy to track), but they are real people who at least alight here at sounds familiar whether by chance or will.

As an aside: I think it’s interesting that there’s an almost triple-traffic spike on October 29th – which is the day I wrote about two extremely internet-vogue items: the OiNK raid and the new Radiohead album. Seems blogging about current events can really boost your audience.

And, since we’re talking about my traffic patterns here at the old blog (because I can think of nothing else to write about), let’s back this thing out and take a look at visitors in week time-chunks:

Seems to prove out the sixty-seventy per-day thing, at least for the past couple weeks, but it also shows that, on the whole, traffic is on the decline from some sort of visitor heyday back towards the middle of the year. Again, the data seems odd to me. I mean, did I really have some three-thousand visitors back in the second week of June? The only thing I wrote about that week was the Santa Maria style BBQ Anthony I and built, and I can’t even get those entries to show up on Google with hand-picked keywords. Funny, but three-thousand visitors is totally intriguing. Wonder what what would happen if we zoomed out and looked at things from a month-chunk basis?

Holy crap what?! Hovering over that June 2007 peak on the live page tells me that it sits at 10,423 visitors. Ten-thousand?! What the crap? How is that even possible? Looking at this, I start thinking the 3,000 peak from the week-level graph may just be the downtrending “tail” from this huge early-June spike. So, what happened earlier in June or late May? On the 29th of May, I wrote about how my then host, StartLogic, sucked ass. That could draw visitors, I suppose. On the 31st of May, I mentioned the Arcade Fire show we attended in Berkeley, and linked to several popular Arcade Fire sites. I guess that could also pull visitors. I’m not sure, but it sure was fun to look at all this, was it not?

Well, then, check this out. While this whole page about some cool things in China is neat-o, I’m linking it because I want you to scroll down to the big black box with the skull and crossbones that says “The Deadly South Peak.” There’s a written account there from a Western guy who hiked this trail in China, and the pictures and story are very well done. You have to see this trail to believe it. I checked, and the trip from Shanghai to Xi’an, which is about 75mi south of Mt. Haushan, is only a two-and-a-half hour flight and is relatively cheap. I’m thinking, “Hey, I go to Shanghai a couple times a year… maybe I should go climb this thing.” Man, would that be an adventure. An insane, ill-fated adventure on which I would likely kill or injure myself… but an adventure nonetheless. I think, if I could get someone to try it with me – it might be up for it. You down?