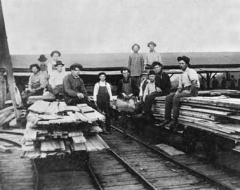 I did write Sunday, but it was only this, and it wasn’t enough.

Sunday and… and… Oh Lord in Heaven I can barely stand to type it… and… I have to go to work tomorrow. It’s my absolute last day of this nine week vacation, and it’s a day of tears and anguish. I had planned, like a good conscientious homeowner, to mow the lawn today. But, when I got up to change into the ratty clothes I wear to cut grass, I had a sudden change of heart. Mow the lawn on my last day of freedom? I think not. No sir, I most certainly think not. You see, even knowing that today is very likely the last chance I’ll have to mow before next weekend (being that it’s gonna be dark after work now with the time change), I just couldn’t bring myself to sacrifice my last day to something so work-like. Instead, I want to read my book, listen to some Dylan, maybe take a nap after playing with Keaton – yeah, wide open.

After that the apathy overcame me, and I just gave up on posting for the day.

Today, however, was Monday (noobs: I write at night, the evening before I post, hence the date discrepancy) and it was my first day back at work. I look back on the day I wrote this entry, on my last day of work some two months ago, and it seems so far away… so why does my time off seem to have gone by so fast? I went into work this morning, and it was like picking up right where I left off. No gradual ramp into activity, rather a nose-dive into the same frigid waters of stress and deadlines. The shock of how quickly things got busy really surprised me. Then again, maybe I’m more overwhelmed than busy – I always have had a problem with trying to solve problems myself rather than let them be solved elsewhere. In some ways, I guess my coming back feels like a big inheritance of problems. I’ve gotten better, for the most part I can force myself to let those working for me solve the problems… but that temptation to jump in and run is still there.

Anyway, I’m starting to not make sense. Regarding my first day back: I thought it went extremely well. I wasn’t crushed by having to return, more like I slid right back into place. That in itself is kinda scary, like I’m so accustomed to work it’s like riding a bike… but it was also kinda nice. Actually, I felt like I got quite a bit “done” today – which is to say, I did a lot to understand what happened while I was out, and get myself back into the game. I know I was dreading it, and I can’t say I wouldn’t have rather lounge about the house reading, but, in the end, it really wasn’t as bad as I thought. Sort of like slamming into a brick wall with a seatbelt on, or something. And now the cycle begins anew: wake, work, family, sleep, repeat. I wonder how I’ll feel come the end of the week? A fellow worker said that his first three post-sabbatical weeks went: angry, resigned, jaded. After that, jaded was permanent. I’ll let you know.

Right now, though, Sharaun’s gone at some chef-kinda party, Keaton’s down for the night, and I’ve put on the Figurines’ latest album (which is no longer new at all) to give it another go. I loved their first album so much I just can’t seem to accept the fact that their follow-up didn’t do much for me. And, it does have some goodness, it just doesn’t hold a candle to their debut. Stinks. I hate it when that happens. The other night I TiVo’d a bunch of old black and white western serials off of the old-stuff channel, and I’ve really been enjoying then. The times when the kids of this nation were weaned on cowboy-‘n’-indian movies has always seemed like good times to me, not sure why. I figure it’s somehow good, from a cultural-history perspective or something, to know about the Trail Blazers’ spot in old-timey westerns.