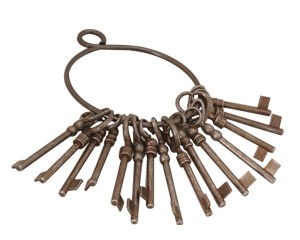 Today Sharaun and I reached a parenting milestone, although, we admittedly reached it long before I thought we would. See, today, we left Keaton at home alone for the first time. Now, before you go calling up CPS, let me elaborate. Sharaun usually heads to the gym early in the morning for an early morning “spin” class (not being a gym kinda guy myself, I imagine this is a Grateful Dead concert style dance class for women in long flowy bohemian skirts). Also important to let you know: Sharaun locks her keys in the car all the time.

Now, with those two pieces of knowledge, you can better appreciate my story. So, Sharaun leaves the house around 5:30am or something for spin class, I’m merrily sleeping – dreaming Natalie Portman is feeding me Pizza Rolls in her underwear (a.k.a. foreplay). ‘Round about quarter-to-seven, my foggy brain thinks it’s hearing a knock-knock-knock at the front door – I groggily dismiss as an auditory hallucination. Couple seconds later and the knocking is back, now loud and unmistakable. I climb out of bed and peer through the peephole: Sharaun. I open the door and retreat behind it so as to hide my unbridled magnificence from the world at large.

“Hey,” I say. “Hey,” she says. “What happened,” I ask. “I’m screwed,” she replies, “I locked my keys in my car.” “Mmm… and you’ve been using your spare key, so you really are screwed,” I concur. “Yeah,” she says, “I’m totally screwed.” “How’d you get here,” I ask. “Susie dropped me off.” “Huh, that was nice,” I say. I then head off to the shower, while Sharaun makes an audible vow to redouble her key-finding efforts. Over the past couple weeks, she’s dumped out and sorted, archaeologist style, through Keaton’s toy bin multiple times. She’s pulled off all the couch cushions twice, poked around under couches and even ruled out odd locations like the garage, bathrooms, and the fridge – all with no results. At this point I’m not too worried. Worst case, I figure as I shower, she puts Keaton in the stroller and walks several miles to the gym to call AAA (on a payphone, because her cellphone is also locked in her car.. with her keys) to come open the door.

But, it never got to worst case – Sharaun walked into the bathroom before I could even hit the showers proudly holding out her found keys in front of her, beaming. “Where were they?,” I asked. “In the couch, where I’ve looked a hundred times,” she replied, “But deep in the crack, way up in there.” “That’s good,” I say. All’s right with the world, right?

“How am I going to get to my car?,” she asks. “We’ll have to leave Keaton here,” I say. At the time, Keaton is still sound asleep in her bed – probably dreaming about Job feeding her Cheerios, or something. “Can we do that?,” she asked. “Well, what else can we do, she’s still asleep,” I say.

And so, I threw on some shorts and a t-shirt and grabbed my wallet and keys and we took off. And, for about five minutes, Keaton ruled the roost – manned the castle. Now, I don’t know if this makes us bad parents… or if I could get in trouble for writing it here, but she seemed to survive OK without us.

And, in the end Sharaun found her lost keys.