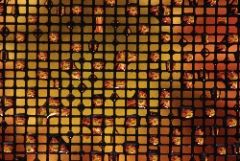 Friday tomorrow, and we have an “off-site” event at work, which means it’s gonna be just a little more than a half day and then an afternoon of early beers and some snooker. I think it’ll be a nice way to ease into the weekend. As for the weekend, I don’t have many plans. Sharaun is leaving me with Keaton all day Saturday while she goes snowboarding. I’m thinking we’ll maybe walk to the park or something. At some point I have big plans to mow and fertilize the lawn, and maybe install a screen door.

My website was down most of the day today, some database issues on the host side which I hope they’ve now worked through. Not that I’m losing millions in trade for every minute of downtime, but I’m sure Sharaun’s grandmother in Florida thinks her computer is broken when she goes to look at Keaton’s new pictures and gets a 404. I really think that blog comment spam is what may be causing my somewhat frequent database issues, as my host limits the number of database “connects” I can have in any given time-chunk. Every time a spam comment gets written to the database (which still happens, even though Akismet catches them and relegates them to an unpublished “spam” queue for later review), it counts against my “max connections” ceiling. Honestly, that’s the only thing I can see pushing me over the limit. Also, though, I think my host has weak database support on my current plan (where I share a single server with hundreds of other users’ websites, and we’re all getting a slice of the same MySQL pipe on the backend). I could upgrade to a virtualized dedicated server – but that costs dough. Anyway, sorry for the nerd-talk.

My beard is progressing nicely and is now rather fuzzy and voluminous, little hairs jutting this way and that in a nice thick tangle. Whenever I’m in the car, I strain my neck to admire it in the rearview. I love watching the water drip off it in streams during my morning shower, and the fact that the fuzz of it obscures the bottom lobe of my ear in the mirror. I have these visions of the pictures from this summer’s future camping trips, where I have this massive jumble of beard hanging off my chops, like the mountain man I always dream about but will never be. Sometimes I wonder if, come the day I decide I want to shave it all off (never?), Keaton will recognize me the same. I know she’ll know who I am, but I can’t help but think she’s gotten used to unshaven daddy as the one true daddy – any other daddy might just be an impostor.

I’m all pumped because Sharaun and I and a bunch of friends all got tickets to see the Arcade Fire play at the Greek Theatre in Berkeley in June. There are still tickets left, so get ’em and join us there – the whole venue is general admission so it should be blissful anarchy trying to jockey for the good seats. Yay! Arcade Fire in an outdoor venue on a nice June night… I can’t wait.