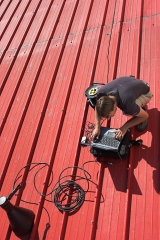 Tuesday, and I’ve got a mixed bag for ya. Had a lot of time tonight… thought about breaking this up into multiple entries to ensure a wall-to-wall week, but sometimes it’s good to knock down the cobwebs, clear house so to speak. If you could try and not get too wrapped up in any one paragraph, it may help ease the awkward transitions betwixt varied topics. Y’know, I don’t normally comment on my own blogs, but I got a comment yesterday from an old friend. I love getting comments from people like this – makes my day, actually. Thanks for the comment Sheila, I’m sure Andy will be interested to hear you’re still dreaming about him. Oh, and maygsters yes it was your husband – and… 12:16am? Sheesh.

Making a bowl of mint chocolate chip ice cream some time after dinner this evening, I spooned in a scoop and lost the bowl to the principle of physics known as “lever action.” The bowl tipped first up, then over, as it jumped off the kitchen counter and headed towards the floor. I watched in slow motion as it turned over, and braced my ears for the sound of shattering. When I heard nothing, I moved my eyes to the point of impact – thankfully the bowl had landed, upside down, on a pair of Sharaun’s flip-flops. The foam rubber providing a soft landing pad for the bowl, and the ice cream falling gently to the faux tile floor below. I did what any discerning ice cream fan would and snatched the scoops up back into the bowl. Floor ice cream is good.

Did some WordPress tinkering tonight. Added a plugin to give some simple Google Analytics reports in my admin panel (helpful quick-glance stats without having to login to stattraq), and added a “most viewed” plugin and report-out data to the sidebar. The most wanted is interesting, as it tracks which of sounds familiar’s posts are visited most often (you can see how many visitors per post by hovering over the links). Also took the opportunity of mucking with the sidebar to remove the long unused audioscrobbler/LastFM link – as I listen to nearly all my music on the iPod now and Winamp tracking just doesn’t make sense anymore. Anyway, just another step in the embetterment of the blog.

Every evening, I’ll usually do a quick scroll though the blog comments that Akisment has branded as spam – just on the off chance it’s ID’d something incorrectly (almost never happens anymore). Tonight, I found a series of spams that intrigued me. For some background, there’s an oft-used spam technique where the spammer uses copied-and-pasted strings of text from pieces of literature in their missive. Sometimes the spam comment is just a few sentences from a book, sometimes the spammer replaces random words in these strings with the spam subject – yielding funny results like this:

All this obfuscation is merely an attempt to bypass the Bayesian style spam filters which are so successful in weeding out the comment wheat from the comment chaff. The random string of words is meant to fool the filter into passing the comment as legitimate. It hardly ever works.

The comments that caught my eye tonight, though, were hawking the comment-spam staple Human Growth Hormone (HGH, for short), and read like this:

I just realized that the whole point of doing interviews was to promote this movie, so see it three times.

I have a lot of real life experience with hustling and doing stupid stuff.

I had had a troubled past, but like most rappers they go out and talk about it to kind of help their career.

I had been approached by a couple of people as far as making movies because of my success in music, but it was always to play the white rapper in Sister Act 2, or something that would just kind of put the final nail into my coffin of my career.

To me, those sounded like real-life quotes. Indeed, copying and pasting one into Google revealed that there were quotes from Mr. Mark Wahlberg. That’s the once-famous “rapper” Marky-Mark, for those who don’t remember. Back in the 90s, he could be seen curling cinderblocks and parading around in his underwear while trying his best to sell a menacing swagger. Now his quotes are being misappropriated to sell Human Growth Hormone. Apparently, this stuff is marketed as being able to help you burn fat, build muscle, and prolong your life. Doesn’t sound like something Marky-Mark would need at all, I can remember how in shape he is because of the chin-ups he did in the “Good Vibrations” video. I’m still waiting for the C&C Music Factory spam hawking cheap propecia, or, Things That Make You Grow Hair.

Tech related, in an attempt to go completely anonymous with regard to my online activities, I once again tried installing Tor the other night. I have to say, the installation procedure and GUI are much nicer than the last time I tried out the applications. Firefox and µTorrent were setup and using Tor/Privoxy in mere seconds. Only one problem, the dang thing still slows your connection down so much it’s just not worth it. Yeah, I’d like the anonymity, but not at the price of my connection… sorry.

I’ve been eating up PF’s new 200 Greatest Songs of the 1960s feature, these lists always give people a lot to talk about. So far, they’re doing pretty good by my judging – even throwing in some obscure tracks that I’ve not heard of. My goal now is to create an iPod playlist of these 200 tunes, just for the sake of doing it. I have a lot of them, and can “find” the rest with little effort I’m sure. Heck, I bet there’ll be a torrent of the whole thing up on the major trackers before too long – such is the age of digital media.

I loved these two posts, here and here, over at marathonpacks a while back. What a great idea. One of the bits that really intrigued me was that this guy actually took a college course called “The Music of the Beatles.” Man, I would’ve killed for that in place of COBOL or Statics or something equally as gay (no disrespect, it’s not my fault the word is slang for “dumb”). Anyway, when I first read them way back I decided I wanted to do my own list – but soon gave up. It’s too hard, and anyway, it’s already been done. Besides, I’ve already covered music that gives me chills – so I think I’m good.

This post is spiraling out of control fast… I’m not sure I can reign it in anymore… Maybe we should poke fun at some of the recent search strings leading people to sounds familiar? OK then, why the eff not… we’re already past the point of repair with this mess:

andre the giant penis when erect
Who is researching this statistic?

Easy South Florida Crack Whores
Yeah, I’m sure there’s a list of these on the internet.

how do birds do it
I’m not the only one.

One Reply to “floor ice cream”