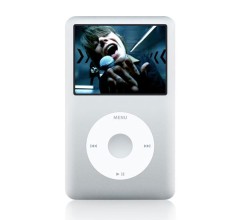 Don’t miss the latest updates to this story, click here.

Being in Oregon – the land of no sales tax – I decided there was no better time than now to go ahead and drop the dosh on one of those new-fangled iPod “Classics.” The 160GB-ness of the thing has been taunting me since the things were announced, and I knew it was just a matter of time before I upgraded. And, not only did I save the ~$25 sales tax I would’ve paid in California, but I also took advantage of the Costco price, which is already $10 less than Apple’s suggested retail price (iPod’s are rarely sold under this suggested price, especially by major retailers). So, all in all, I think I made out just about as good as can be. Took the thing home for $339 out the door. May sound expensive to those who could care less about 60GB vs. 160GB, but for musicophiles with platter-busting collections it really is worth it to carry around that much more variety.

So, last night I began trying to figure out just how in the world I was going to get all my music off my old iPod, and subsequently on to my new iPod. See, I manually manage my music on my iPod – I don’t use the iTunes library features to manage my music collection, and that means I also don’t use the “automatically sync” feature to get music on and off my device.

I realize this may put me in a minority of users, but, because 1) I don’t use iTunes to manage my music in general, and 2) my collection is larger than my iPod’s capacity, it’s just more convenient for me to drag-and-drop what I want when I want rather than relying on some selective sync functionality. Don’t get me wrong, I can see the plus-side to using the auto-sync functionality, like not having to completely delete and re-add things in situations where I’ve “updated” an MP3 folder/album on my hard drive, perhaps adding artwork or updating ID3 tags. But still, I prefer to do it manually.

Anyway, back to my problem. Surely someone has faced this before. Say you’re a manual iPod user like me (there has to be more of us out there, right?), and you outgrow your old iPod, or just figure the new one is plain “cooler,” and decide to upgrade to Apple’s latest offering. If you’re like me, you’ve likely spent a lot of time pruning, tending, and shaping the music (and other content) on your iPod, and you probably want to “start” with your new iPod having the same content as your old one, and then add new content from there. In other words, it’d be nice if the “baseline” content on your new iPod was a mirror image, or snapshot, of what all is on your old iPod. Makes sense, right? Think of it as “migrating” the entirety of your old iPod onto your new one.

Note: I’m aware that techniques exist for doing this using both iPods in disk mode, but I’m pretty sure that will only work on two iPod’s of the same generation (or, at the least, having the same database version). Since Apple changed the iTunesDB structure completely (version 25) going to the Touch/Classic sixth generation devices, I don’t think I can get away with doing something as easy as this when moving from a less-than-sixth generation one. But, honestly, I also didn’t give it a try.

Now, even though I still have all the content that’s on my iPod stored on my PC, I don’t exactly know offhand what’s on there and what’s not. I have a general idea, but my collection is huuuge, and the best and easiest way to be sure I get an exact copy of my existing iPod content would be to simply “copy off” everything that’s on there and then move it to my new iPod. Sure, worst case, I could simply re-pick all the right content from my larger collection, but it would likely take me weeks to get just the right items (honestly, you may opt to do this… give yourself a “fresh start” and relive the fun that is filling your iPod with the perfect collection of music for the first time). So, again, we need to do the following things:

I’m gonna tell you how I did this, even though it was an imperfect process in the end (meaning, I didn’t exactly meet my own requirements above, as I lost the iTunes/iPod metadata). Ready? Here it is; it’s actually quite simple:

To be clear, SharePod does create an XML file which you can use via iTunes’ “Import” function. I originally thought that, since this XML file contained the metadata mentioned above, I may be able to preserve things like “play count” and rating, etc. when importing. Turns out, iTunes didn’t “get” the metadata, even when using the import feature and SharePod’s XML file (at least, for me it didn’t). So, the end result is that you’ll effectively reset all that data. You’ll lose play counts, ratings, last played dates, etc. It kinda sucks, but it’s better than nothing. And, as far as I was willing to muck with it, it was the best I could come up with.

There may be other ways to do this, using different software to achieve the same thing (especially since I’m only talking Windows here, and not Mac). But I think it all amounts to the simple process of 1) extracting the data from the old device and 2) putting back on the new device. I would love to find a way to maintain the metadata (I know… you’re going to say, “Use iTunes to manage your music…”), but for now I’m happy enough to have a cloned copy of my old iPod as a starting-point for my new one.

But Dave, what about my playlists?

Look, I know that a lot of people have spent a big amount of time and effort making super-awesome playlists from the content on their iPods. For that reason, I can see why you’d want to make sure your playlists come over to your new iPod intact as well. Unfortunately, I’m not entirely sure how to do this, as I didn’t have any treasured playlists I wanted to bring over for my upgrade. I think, however, that you can use SharePod’s playlist export feature in much the same way as described above for tracks to accomplish the same thing. Export the playlist, which, I believe, amounts to exporting the songs that the playlist contains, and then import the playlist through iTunes using the XML file that SharePod creates.

Well, that’s it. That’s I how managed to transfer all the music from my old iPod onto my new iPod, and start with what’s essentially a carbon-copy of what I already had. Hope it helps someone who may find themselves wanting to do the same thing. Oh, and, by the way, if anyone has any suggestions or tweaks for this process (especially if you know how to do the above while keeping the metadata for the tracks), please leave a comment on this entry and let the world know! Thanks!

After writing this, I decided to try a bunch of commercially available alternatives to the method I describe above. For what it’s worth, all the software I tried was able to get the MP3s off the device. However, none were able to successfully preserve the iTunes metadata (things like playcounts, preset-EQ, date-added, skipcounts, etc.). My findings:

So, again, overall it seems like there are a lot of solutions to reclaim your actual MP3 files from an iPod and move them to a new one (regardless of iPod generation). However, based on my research, I cannot find any reliable application to reclaim files and metadata – specifically going from a pre-6G device to a 6G one. So all you people who manually manage your music, and want to upgrade your iPod Photo to an iPod Classic… get ready to lose your metadata.

Oh, and hey, before I go… and also iPod related…

On another note, I’m with this poster… I’d love it if Apple allowed you to group the tracks within a playlist by album or artist. This way, you could open a “New Music” playlist and see, not a huge list of songs, but instead, a nice tidy list organized albums or artists, to which you could further drill-down to track level. I know this isn’t useful for most folks who don’t view their music from an album-level of granularity (rather than just a “loose” collection of tracks), but since I tend to listen to music as albums moreso than a string of singles – it would indeed be useful to me. Anyway, would be nice to see in a future firmware… is all I’m sayin’.