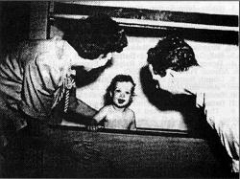 Happy Halloween friends and enemies! Let not your modern-day Protestant church rob you of the good times this holiday affords the world! Forsake that “Harvest Festival” or “Fall Celebration” for some good old trick-or-treating with a scary mask and some fake blood! Maybe get sick on candy like you were a kid again. If not tonight, when else?

Tonight (which is last night as you read this, should you know nothing about when/how I blog) Keaton sat on my lap and watched It’s The Great Pumpkin, Charlie Brown with me (on DVD, of course, since it’s such a classic). To my surprise, she sat right down with me and truly paid attention. I think it’s because she’s able to recognize so many things: pumpkins, ghosts, the moon, a football, a dog, hats, trees, leaves, and mail – just to name a few. Her sense of recognition and memory impresses me on a daily basis, and her vocabulary, word usage, and phrase-building ability boggles my mind. She says things like “Keeper, out, room!” to the cat; “Daddy, reading, book,” to me; “Mommy, cooking, dinner, hungry, eat,” all together like she’s really trying to make a coherent thought. I know it’s like just the beginning of her “grouping” the words she knows around a single binding action or concept, but it’s still pretty amazing. Pretty much every day she says a word I hadn’t even thought she’d known… it’s pretty impressive.

I went to lunch with a fellow manager from work today, and even though I don’t start back there until Monday, I couldn’t help but use our time to begin gearing my mind for the return. I asked about the usual: what’s going on, how’s morale, how are the politics, who’s doing what, what’s coming up, what happened while I was out, and what of the latest rumors and soap opera goings-on. It was a good conversation, but, in the end, it more than reinforced my dream of winning the lottery Saturday night so I just don’t have to go in at all. I’ve waffled here before about my job – which I truly do enjoy, and feel I’m good at – but also on the other hand wouldn’t mind seeing being swallowed up whole by the Earth in some freak geological event. It’s a fine balance, a knife-edge thing of sorts. I fear, however, that I will be going back… that much, at least, is rather inevitable. And, if I’m to go back and continue to do well – I figured I better start those long-rested hamsters a’running again before I walk in on day-one. Sigh… it begins.

Tonight I watched most (not all, I’ll admit, as it began wearing on me) of the Democratic debate on MSNBC. Ugh… people… we’ve got another whole year of this. I don’t know that I can take it. I’m a fairly well-established social liberal, so I like to think I identify with the general current of thought of these people, their platforms. But man, I’m already weary. Anyone else share in my apathy? I hate how politics can just suck the life of out seemingly everything sometimes. Why, when I watch these people, do I take on such an air of doubt… why do I find it so hard to assume they are being honest? What have you done to me, George W. Bush? You’ve ruined me. You’re such a fucker. You’re a fucker and you’ve made me ashamed of my country’s truckballs-style John Wayne politics on the world stage. Ugh… another year.

Finally, before I go, a snippet from a recent interview with Trent Reznor (Nine Inch Nails frontman and a proponent of various forms of the “new thought” regarding music distribution), where he admits he was an OiNKer (see my earlier entry if the word “OiNKer” means nothing to you), and talks a bit about the former site:

What do you think about OiNK being shut down?

Trent: I’ll admit I had an account there and frequented it quite often. At the end of the day, what made OiNK a great place was that it was like the world’s greatest record store. Pretty much anything you could ever imagine, it was there, and it was there in the format you wanted. If OiNK cost anything, I would certainly have paid, but there isn’t the equivalent of that in the retail space right now. iTunes kind of feels like Sam Goody to me. I don’t feel cool when I go there. I’m tired of seeing John Mayer’s face pop up. I feel like I’m being hustled when I visit there, and I don’t think their product is that great. DRM, low bit rate, etc. Amazon has potential, but none of them get around the issue of pre-release leaks. And that’s what’s such a difficult puzzle at the moment. If your favorite band in the world has a leaked record out, do you listen to it or do you not listen to it? People on those boards, they’re grateful for the person that uploaded it — they’re the hero. They’re not stealing it because they’re going to make money off of it; they’re stealing it because they love the band. I’m not saying that I think OiNK is morally correct, but I do know that it existed because it filled a void of what people want.

Man, that sure sounds like it was a cool website… too bad I never got the chance to check it out. In summary: I was never a member. But, if there was some some bizarro world in which I was – I most certainly would’ve only reveled in the site’s groundbreaking role in digital content distribution, and never partook in it’s tainted wares. I’m to straight and narrow to put my neck out there like that… don’t y’all know me at all?