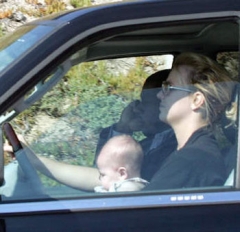 As I’ve mentioned many times here on sounds familiar, our family is going on massive, cross-country RV odyssey this summer.

As this hopefully amazing trip nears, I’ve been putting the final touches on all manner of planning.  One thing which I wanted to make sure I got right was the question of what we do with little Cohen on the long journey.  He’ll be about eleven months old, and therefore will need to travel in a carseat.  Not knowing where best to install a carseat in an RV, I hit-up Google for some advice.  I was at first a bit dismayed that there didn’t seem to be all that much information out there.

Then I remembered that most sane people wouldn’t choose to drive a baby eight-thousand miles around the USA in an RV and so realized that this lack of information kind of made sense.  I would have to break out my Google kung-fu and find the deep links, search some RV-centric forums, maybe even some carseat-centric ones (yes, there are plenty of both – if it exists, the internet has a forum, or fetish, or both, for it).  After my initial dismay, however, my reaction changed a bit when I actually found some discussion…

Did you know there are carseat nazis?  Well, there are.

Look, before we get started here – I’m not attempting, in any way, to minimize the need for, or obvious safety benefits of, carseats for children and infants.  That would be stupid.  Carseats are great and I’m all for laws compelling their usage.  I am no scofflaw or negligent parent, and neither is my wife – who cut our daughter’s grapes into quarters until she was well past two years old.  I’ll also try to not be too derisive here towards those folks who have made carseat science their religion of choice.

Anyway, there are carseat nazis.

My search above eventually led me to what looked like a series of relevant threads on a carseat forum.  Unfortunately, germane as those threads may be, they were all nearly universally saying there is simply no safe way to transport a baby (or child, by extension) in an RV.  Most of the respondents, in fact, were quite quick to demonize anyone who asked about it or suggested doing so.  Take for example some of the following responses to variations of the question, “What do I do about carseats in RVs?” (all typos left intact, for extra derision):

No way Jose!! That’s asking for a multiple funeral. Car seats cannot be installed on side-facing vehicle seats – RV seats are not crash tested at all.

I would never use the dinette seats. Ever. Safe use requires a chassis-bolted seat belt in a forward-facing seat and most RV seats are only afixed to plywood in the flooring.

There are just so many risks with RVs (top heavy leads to easy roll over, countless projectiles including other passengers, etc.) that my child will never ride in one.  An unrestrained 100lbs person (or someone whose belt is not boldet to the core frame) becomes about 3000lbs of force upon your child in a 30 MPH crash.

RV’s are underpowered and are a nuisciance pest to our highways, due to there slow speeds, difficulty to pass, and lack of driver training required to opperate.

We’d love to RV some day, but we’d never consider putting the kids in a motorized RV – eek, the risks.

Loose or larger items typically transported in RVs during a trip can become deadly projectiles in a crash. For example, during a crash at 30 mph, a case of canned goods or bottled water weighing 20 lbs flying off the counter or out of the kitchenette’s cupboard would be the equivalent of 600 lbs slamming into an RV occupant.  An improperly restrained passenger who weighs 150 lbs would become the equivalent of 4,500 lbs during a crash at 30 mph.

A tow-behind camper and vehicle with which to tow it is the only safe option. That way everyone stay safely restrained, but you still can camp.

The injuries sustained by kids from wearing lap only belts are horrible- lacerations to organs in the lower abdomen, septic shock from torn intestines, lower spinal fractures and worse. So much so that emergency room surgeons have given the symptoms a name, “Seatbelt Syndrome.” If you can find any other option, including a custom tether anchor, your child would be much safer.

I don’t even know where to start (although I am intrigued about being able to become 3,000lbs of “force,” that sounds kind of awesome).  I think it’s fair (and derisive I suppose, sorry again) to say that carseat-heads probably missed the day Newtonian physics was taught in school… or maybe only half-listened.  Their hearts are in the right place, I can say that much.  I can get this kind of attitude, I think.  We all love our kids and would rather they stay alive than cease living – that’s an easy one.  But something about the above smacks me as self-righteous, loving-to-the-point-of-crippling, overbearing and over-protective.

So I tell you what internet.  Here’s what we’re going to do:  We are going to take Cohen (eleven months) and Keaton (five years) on this amazing, once-in-a-lifetime journey.  We’re going to put the carseats in the dinette location with the latch and bank on #1 – not crashing & #2 – being the winning/bigger object if and when we do.  I’m not going to care if the belts are attached to the frame or the wood or whatever.  I’m also not going to even consider the fact that items in an RV during a crash can become “missiles.”  In fact, I contend that this point is beyond ridiculous.  Anything, in any wreck, can become a deadly projectile.  I can also tell you right now I will probably let my five year old do “reasonable” walking around in the living quarters whilst we drive (no scissors allowed).  You know what that means, I am obviously rooting for the worst.

A car crash is bad; a car crash is never good; the most basic idiot knows this.  I hereby proclaim that unless you never, ever take your child in a vehicle at all, ever, period – you are just death-baiting.  You really gonna sit there and gamble with your kid’s life like that?   You monster, you abject beast.  I only drive if we have to go to the emergency room (when my kid’s peanut allergy acts up) and when I do I keep the child in an inflatable bubble and never go faster than 25mph, beat that.

28 Replies to “carseats in RVs (or, death-baiting)”