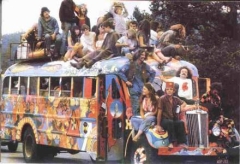 Sunday night and I guess I did another one about music. I offer advanced apology to all you straights.

Had the afternoon pretty much to myself, used the time to do a whole lot of nothing but for washing dishes and tidying up here and there. With my time, I watched a 1958 movie called “The Brain Eaters,” about little fury parasitic creatures that bore their way up from the center of the Earth to attach to the back of human heads and eat their brains, controlling them “as if they were robuts,” of course, while doing so. It was just plain awesome. When Keaton woke up, we turned off the TV (it rots your brain, you know) and turned on some music instead. We read some books and I fed her dinner, and we played rocking-horse and blanket-fort until Mom got home.

Well, that’s enough lead-in, here’s what I wrote for today.

I always consider myself to have “grown up” or “come of age” during the years I spent in Florida. The town we lived in wasn’t really a “small” town, but it wasn’t a sprawling metropolis either. As I’ve mentioned before, sometime around the tender age of thirteen or so, I began throwing myself headlong into the music, ideas, and culture of a time two decades before the one I was presently teen-aging in. You’ll need these two bits of information together to appreciate the story of the “Yes bus,” which I’m writing to both plain-out tell the story and also as a nice segue into a piece on the band.

Seeing as, at the time, we (myself and the crew I ran with) were busy prototyping ourselves after the teenagers of twenty years past (making sure to temper with plenty of 90s-style teenage sneery-middle-finger-disdain), we were super sensitive to all things “summer of love.” And, in our town, there happened to be a fine rolling example of the nouveau-hippy never-let-go attitude: the Yes bus.

The Yes bus was, as you might expect, a Volkswagen bus (from the cherry pre-’68 T1 years) which had been (fairly skillfully) tricked-out with a full psychedelic paintjob. And, while the entire body of the vehicle was covered in multicolored swirls and flowers, the true “coolness” of the thing came from the two huge band logos decorating either of the broad sides.

One one side, it was the Doors logo, font-perfect down to the two-half Os and four-piece S; on the opposite side, the Yes logo, also skillfully copied in its familiar Roger Dean toothpaste-squirt glory. As self-proclaimed students of the 60s, we were of course drawn to this glorious machine like bees to honey (nevermind that we likely didn’t realize Yes’ career was nearly entirely 70s-based).

Surely the guys piloting this bus were some of the coolest people our midsized burg had to offer, we thought, as we tried to surreptitiously follow them around on our bikes to find out where they “crashed.” Maybe we were hoping to find a tucked-away Utopian society that never quite made the mental move off the muddy fields of Yasgur’s farm, and was still championing our storied image of the decade: free love, fun drugs, philanthropy, and the communal celebration of great, great music.

At the time, it was fairly chic to be “into” the Doors, as, for some reason, it is during those early sights-set-on-stoner teenage years. The band had recently been given the Hollywood treatment, and the girls we hung out with were requesting volumes of Morrison’s “poetry” for Christmas, convinced he was surely an overlooked-Laureate denied by a generation too square to “tune in.” Which, as an aside, is I think a big part of why I sometimes poo-poo the band’s output as having a not-insignificant element of novelty/frivolity to it… but that’s neither here nor there. Anyway, the point is that The Doors were hot (well, amongst us proto-burnouts, at least). I always thought it was cool that these guys had put the Doors logo on the bus. The Yes logo, on the other hand, was something a little less familiar to me.

It would be at least another summer or so before I’d have my great prog-rock awakening, dabbling toes first with things like ELP’s “Lucky Man,” “Knife Edge”, moving onto the wonder of hearing Fragile for the first time, and finally even coming to appreciate the more hardcore stuff (ahem, Tarkus). (For whatever reason, I didn’t get into King Crimson until just some years ago, shame on me for not following that family tree back to its roots long ago.) I always thought it was a cool logo, I just kind of wondered why they hadn’t chosen a more “suitable” band to display opposite the Doors. And, at the time, I would’ve likely meant “suitable” as The Beatles.

Now then, over the past few years, I have become a complete nut for nearly every scrap and tear of Yes’ “classic period” output. I’ve come to be in awe of their post-Fragile catalog, up through about Relayer, and have decided they likely made some of the most ingenious and enjoyable music of the early 1970s. And now, looking back, I bet those Yes bus guys were even cooler than I figured them for. Yes is kind of like Rush, or maybe Dylan, in the super-binary love/hate dichotomous followings they inspire. Typically, you either hate Yes, or you love Yes (allowing, as any discerning fan must, for favoring one incarnation, period, or lineup over others). Me, I learned only recently that I’m a lover, not a hater.

So, Yes bus guys, I’m sorry I naively thought you’d chosen the wrong rockband logo to adorn your vehicle. In the end, I was wrong. In fact, were you erased from my memory and I saw you drive by for the first time tomorrow, I’d likely silently nod in approval at your decision to proclaim your identification with the difficultly dense Yes, while simultaneously chuckling inside at the obviousness of you’re being a Doors fan. What? You like Zeppelin and the Sex Pistols too? Man, you must be cool. Ahhh… how I’ve grown. Age truly does bring with it wisdom.

And, making for a nice transition from the above topic: Lately I’ve had a huge prog hard-on, and have been littering the still-has-so-much-room 160GB iPod with the likes of The Nice, Gentle Giant, Van der Graaf Generator, Harmonium, Atomic Rooter, and early Genesis (sitting alongside the “first run” bands that already had a home thereon, like ELP, Yes, and King Crimson). That’s one good thing about the new humongous iPods… you can really delve deep into the multi-fingered rock ‘n’ roll family tree, keeping genre-representative playlists all the way.

Was that OK? Took me a while to write, so I hope so.