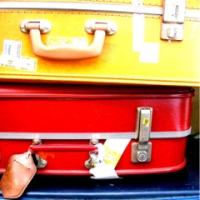 Tuesday, and my last day of vacation. Well, last day for another three days, at least. Then I’m off another entire week. I return to work on the 23rd, and that leaves me with just five weeks of work left before my two-month “sabbatical.” I am truly excited about this, nearly to the point of advanced mental checkout. Knowing that you only have a month or so left at the sawmill can make a person’s mind really start to wander. I know it’s gonna come up fast, I can already tell. Anyway, last night we went to dinner with the family and some friends, then stole and enjoyed a cam copy of the Cusack new horror flick, 1408. Was a low-key evening and a nice way to spend our last real night together with Sharaun’s folks. Let’s try to write a lil’ bit now, shall we?

Can’t hardly believe it’s July in 2007 already. That’s more than the halfway mark (don’t think I don’t know this means I missed my yearly “half-best” list). The fact that we’re already on the waning side of the ’07 also means that my mind starts turning towards Halloween. Last year, almost every single one of my complicated props broke in some major way. Punks tried to steal my coffin-popper, the flying crank ghost got tangled up in her own puppetstrings and ended up a twisted heap, the ceiling dropper shook himself loose to some degree, and the witch’s rags are looking a bit too… raggedy. (Not to mention I got penis’d.) After last year’s soirée, I had all but decided that it would be the last of it – that I was done. Now, however, coming up on August (usually the first month I start thinking about props)… I’m not so sure. Guess I’ll just see how it goes.

I’m off to Oregon in the early ‘morn tomorrow, driving there in the dark as the flight leaves with the sun. I’ll spend a couple quick days at work there, and an even quicker night at my folks’ place between the two. So, once again, posting may be light for the next week or so – which is kinda nice for me, but perhaps not so good for maintaining readership. Guess that’s the way blogging goes.

Until sometime later, stick with me.