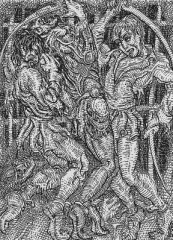 Back when Sharaun and I were last in Oregon, we had been scheduled to participate in our greater neighborhood’s annual garage sale. We had both had been looking forward to it, not only because garage sales have some sort of kitschy fun associated with them, but because it would’ve been an opportunity to offload some of the old, yet still useful, junk we’ve been hoarding over the years. Well, as you likely guess from all the past-tense verbiage, we didn’t get to participate. We instead flew to Oregon and left our unused mathoms to collect more dust. This coming weekend, however, our friends neighborhood is doing the same thing – and we’ve signed up with them for a joint ticket. Meaning, this week we’ll pull down all that old stuff, put a nice spitshine on it, and move it for insane! Insane! Insane! low prices.

I’m excited, not at the prospect of turning a buck, but rather at the chance to get rid of so many cubic feet of material we’ve been housing. We’ve got stereo equipment, office furniture, CD shelves, vases, computer stuff, books, and all sorts of useful things which are simply rotting at our place – I’m hoping we can find good home for them. Otherwise, anything left unsold at the end of the day goes to Goodwill (the well-off person’s tax-deductible trip to the dump). Anyway, how much for an old office chair with boogers smeared on the bottom of the seat?

Every day before I go to work I check the garden. The little cages I erected over the strawberries are working, I’ve got plump red berries that haven’t been completely eaten away by birds. I look over each plant and try to judge if it’s grown noticeably from the last time I did so. The corn seems to the be changing the fastest, and I swear it puts on inches over a matter of days. I love being out there in the morning, with the cold air still clinging to the ground and dew covering everything. Sometimes I stay out there for up to five minutes, and wish I could just call in sick and climb into the hammock instead. You think everyone who’s only been at their career for seven years gets this itch? I mean, I’ve got like a hundred more years of work ahead of me and I’m already antsy for the next phase. Where are my millions? Where is my early retirement? Let me out.

I know it shouldn’t be, but I’ve been letting my anticipation build for the new Smashing Pumpkins album. Even though it’s not the original lineup, I’m excited by the increasing level of hype floating around the internet. I’ve gotta admit that I’m already quite prepared for a letdown, and in fact expect one given the steady decline of the Pumpkins work post Mellon Collie. But, I’ve always been a fan, and, against all my better judgments, am looking forward to the leak.