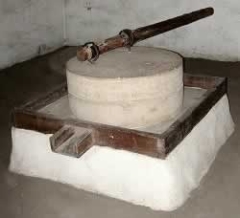 Oregon. We took wing and arrived in the dreary rainy state on Friday evening, deciding to come up and spend the weekend with my family – as I had to work at the local office here today and tomorrow. And it is good. My folks get to hang out with Keaton – which is good for her (plus I think the enjoy it too). Anyway, we’re here and I’m writing on a weekend after a solid week of leaving the blog to rot.

It was work. I’ll say that up front: it was work. Work made the blog go untouched, work stole my brain during the day, monopolized my thoughts. It was another week trudging around in circles along my little depressed path, round and round around the millstone, behind the guy in front of me and in front of the guy behind me. I wanted to write, did write, but never finished or didn’t have my heart in it so… it rots.

Before I left, as part of my “doin’ stuff I have to do before I go” stuff, I mowed the lawn. I love mowing the lawn, and I hate mowing the lawn. The part of me which is incredibly lazy (which I figure is a about a 230lbs part) dreads it. The part of me which enjoys hard work and likes exercise (which I figure is about 15lbs of me, consisting entirely of my wang and babybeans) enjoys it. But, I did it anyway, and got to listen to some good stuff on the iPod while I did. Plus, I’ll be please as punch when we roll up Tuesday night and the headlights cast their beams over the neatly shorn grass. Yeah, the fruits of my labor.

Speaking of fruits – and vegetables, but I’ll get to them later – I’m planning on digging some holes in my backyard and putting in some fruit trees this next week. I’m thinking some kinda citrus, likely tangerine, apple, and maybe a plum (I think I like plums). I told Sharaun that, if we ever got stranded at our house – for instance, if all the earth surrounding our horse dropped into a sea of molten lava, and we were to live alone on our little island of land amidst the burning sea of liquid rock – I want us to be able to survive by eating the bounty of our small .24 acre lot. So, with the veggies I’m already trying to grow, and the fruit trees I plan on trying to grow – we should be close. Now I only have to cordon of some yard for livestock… and dig a well… and, and… eh… whatever. Oh, and, speaking of vegetables – everything I planted, aside from the peppers, is now growing. Maybe peppers take longer to sprout or something… which I find odd, as they are buried the shallowest (the least deep?).

Before I go, I thought I’d share some comments from Stephen King on the last blog I bothered to write. Mr. Horror talks about violent writing and the link to real-life violence. See, even Stephen King says I’m probably not going to kill anyone.

3 Replies to “leaving the blog to rot”