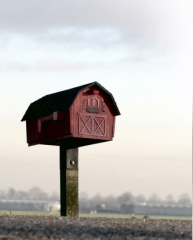 Monday night around 8:30pm. I came home and mowed at lunch, took a little longer than my usual hour trip home but I could afford it. Sharaun had an evening engagement tonight and another tomorrow night, and I didn’t get the chance to mow this weekend after being in China for more than a week since the last pass. So, I took care of it when I could – lunch hour. And now I’m here alone half-watching some Simpsons reruns and writing.

Since getting back in town, I’ve watched two TiVo’d episodes of the new Discovery Channel series Planet Earth – which I’ve found pretty engaging. I’ve always enjoyed “nature” shows when they’re done right, and this one is spectacular, just like all the hype said. One thing it does do though, is increase my yen for a high-definition television – I can already tell the thing would look incredible in HD (even though it probably would be all ugly and stretchy-squashy because nothing seems to be the right shape for the rectangular HDTVs). When are they gonna figure that out anyway? You know when I’ll spend two grand on a TV? When the picture being broadcast “fits” without A) clipping the edges, B) letterboxing, C) squishing people to look all fat, and D) squishing the extreme edges to marginally improve over (C). Yeah, eat that HDTV manufacturers… or TV broadcasters… or filmographers… or whomever is responsible.

While we’re on the topic of TV shows, I was reading a buddy’s blog the other day and hit upon a seemingly simple statement that he and his wife had been reliving some 1980’s moments watching The Wonder Years on TV. He even mentioned the name of the network, something called “Ion.” I was immediately drop-jawed. I’ve pined for Wonder Years reruns ever since the VHS copies I taped off Nick at Nite in the old days were plowed into a landfill. I immediately opened multiple Firefox tabs to kick into high-gear in my search to see A) what the hell the Ion network is, and B) do I get it on DirecTV here in California. Turns out, I freakin’ do get it… and I already had the channel mapped (I think it used to be the WB or UPN or something?)… anyway, two minutes later I had a TiVo season pass setup for the best show on earth, and one that shaped my tween years like none other. Oh Mike… you know not what you have done. Now, if we could just meet somewhere between that snowy place where you are and the sunny place where I am to catch the premier of The Dark Crystal II, I’d be in clover.

Now for some dispatches from last week in China:

My first night in Shanghai, I decided that were I to sleep immediately after getting to the hotel, I’d wake up in the middle of the night and not be able to get back to sleep. My plan was to retire to the bedsheets only upon complete exhaustion. For that reason, when I got to the hotel I showered, redressed, and called a buddy of mine who lives in town. “Beers?,” I asked, “Beers,” he affirmed. Twenty minutes later and we were walking down a pub-lined Shanghai street in search of hoppy goodness. A few pints and a plate of french-fries later, I was climbing into a taxi and handing the cabbie my room keycard to express my desired destination. Now, I’ve been to Shanghai once before, and I’m moderately familiar with certain areas – so I knew enough to recognize that the driver was headed in the right direction. As we neared the area where I knew the hotel to be, I stopped paying attention assuming he’d got it right and wasn’t taking me for a ride (I know that, literally, he was, but I’m using the expression here… well… if you didn’t get it you don’t deserve the explanation).

Soon, we were pulling into the taxi loop at the hotel. The driver stopped and said something to me in Chinese, I glanced at the meter and handed over the requisite 16 yuan. Stepping out of the cab I walked toward the large revolving doors of the hotel. In the elaborate glass doors there were little “pockets” with shrubbery and Chinese-style decor, the whole thing being a large rotating circle split down the center by a glass partition (you’ve no doubt seen the type of door, which is actually harder to describe in words than I’d’ve every thought). Anyway, I remember thinking that I didn’t remember the little pockets of decorations coming into the hotel earlier. Then, as I stepped into the lobby, it hit me: this was not my hotel. Confused for a moment, I walked around thinking I’d perhaps entered through and alternate entrance and was just approaching from an unfamiliar angle. Nope, wrong hotel altogether.

Not knowing what to do, but knowing I was relatively close to my real hotel, I walked back outside and surveyed my surroundings. My head was telling me my hotel was just down the road somewhere, and the way to my right looked most promising by virtue of some big buildings. So, I struck off to the right and soon found myself between two hotels, the wrong one I’d just left and another, the name of which I could not yet see but which ended up being mine (I guess the cabbie had simply dropped me between the two assuming I’d walk to the right one). As I walked in the darkness, a man appeared from the curb and began approaching me with quickness.

“Hi!,” he said. “Oh crap,” I thought, what now? “Beautiful girl, sir?” Ahh… the outside-hotel hustler shtick, a simple pimp trying to move his merchandise, a common occurrence for westerners in China. “No thank you,” I said as I walked on, not stopping to give him more conversation time. “Nice girl, sir!” Nice girl? “Hold the boat!,” the little devil-looking me on my left shoulder began, “Beautiful and nice?!” I turned towards the approaching little man. “Don’t you even!,” harped the the little cherub-me perched on my right shoulder – as he shot a lightning bolt of righteousness at the devil-me opposite him, causing devil-me to explode in a poof of red dust. “No; no thanks anyway,” I mutter as I shuffle away.

One Reply to “beautiful and nice?”