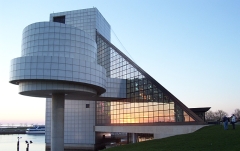 Tuesday night and I had a great time finishing up yesterday’s mowing. It was the backyard this time, and I purposely kept finding little things to do to stay out in the weather and sweat a little longer. It was so perfect, warm and green and the iPod was on-point, I enjoyed stooping and kneeling and the sheen of sweat on my face. The drip, drip, drip of sweat off the long tangle of my beard made me even more happy. I mowed, edged, pulled weeds, sprayed weeds, fertilized, and fixed four sprinklers – it was a banner day for yardwork. In conclusion, I’d like to thank Congress for pulling-in daylight savings time and making all this after-work earth-time possible. I love 8pm sunsets.

I’ve written before about how I have a slight obsession with “true crime” stories. No, not like the cheap novels or anything, more like those “forensic” shows, and anything to do with serial killers. In fact, it’s a small theme on this site, bucketed under the “darkside” tag moniker. To me, serial killers are somewhat fascinating – not because they are awesome, but because it often boggles me to try and wrap my mind around what they do. Don’t worry, I’m not thinking about serial killing anyone.

Anyway, I’ve always been interested in the history around the Zodiac killer, especially since finding an obsessively detailed website based on the still-anonymous killer and his crimes a few years ago. It was with zeal, then, that I read the recent news that, with everything being stirred up again because of the new Zodiac movie, police in San Francisco had “discovered” a lost card from 1990 that may, in fact, be from the Zodiac killer. Well, of course the zodiackiller.com guy posted the high-res scans today, and the message boards are lighting-up with couch-based detectives trying to puzzle out meaning from the cryptic missive. Interesting, and will be fun to watch develop. Wouldn’t it be cool if, by getting his wish and making it big in public eye, he ends up hanging himself?

Today, in the middle of a meeting we were both in at work, Pat IM’d me this link. For those of you who managed to resist the urge to click the aforelinked link, I’ll pass along the title here before I go on to make my point – the article is called: The Great Rock Hope, Arcade Fire grabs the baton from Bruce Springsteen and U2, and it begins with the auspicious sentence, “For those who haven’t been following along, rock critics have crowned a new World’s Greatest Band.”

Well damn, if that ain’t coming right out and saying it.

Should Slate be afraid? Afraid to call the Arcade Fire the new “world’s greatest band?” I mean, that’s pretty presumptuous, right? So many people are thinking it, though, I guarantee. The band, having blown away the music press with their debut, have come-correct again this year with an incredibly solid sophomore effort (and now, for your benefit, I won’t keep summing up things which are much better written in the Slate article). I do have to say, however, that I feel entirely vindicated in comparing the ‘Fire to the same bands Slate does in my many lusty rants about their awesomeness.

The Slate article goes on to say that the Arcade Fire are “…a gale-force live band,” and damn if I can’t do anything but nod my head in agreement after seeing them only once prior in a tiiiiny little club in San Francisco. In fact, hoping for a repeat of that history, I recently spearheaded an e-mail campaign to try and recruit some friends to go see the ‘Fire live when they’re out this way later this summer, and my mail went something like this:

Tickets for the Arcade Fire’s two shows in Berkley (at the Greek Theater) go on sale this Sunday via Ticketmaster, but tomorrow through some backdoor pre-sale website. Either way, I’m buying some – and hope to get them during tomorrow’s pre-sale. There are two shows, June 1st and 2nd, which is a Friday and Saturday. I’m leaning towards the June 2 Saturday show, as the post-work Friday afternoon drive to Berkley sounds like crap. Tickets are $31.50ea (plus some fees I bet), and the entire venue is general admission.

Reply and lemme know if you’re interested, and how many tickets I should get if you are down.

Even if you don’t know the ‘Fire’s work, the show should rock (plus you can tell your kids you saw them and they’ll marvel at your role as a piece of rock-‘n’-roll history). If you want to get an idea what the band is like live, check out their SNL performances last week on YouTube here.

And hey, if the Slate (and many other) hype is to be believed… maybe my “piece of rock-‘n’-roll history” statement ain’t that far off.