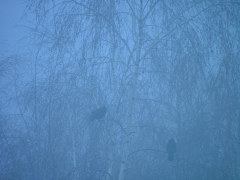 Hellooo from Tuesday. I’m home alone, Sharaun’s at the gym, Keaton’s sleeping. Listening to my iPod, typing on my laptop, flirting with the idea of doing the dishes before Sharaun gets home… probably won’t (edit: I did). I’m very relaxed now, having the house to myself and only the living room light on; the front room is full of shadows and the Fallish weather outside is spilling in through the open back door. Sometimes a gray sky seems to “mute” outside sound to me, the way fog seems to – like cold and cloudy days are somehow more silent and contemplative. That’s how I feel now, reminds me of killing time on Fall days between classes back in college, makes me want to smoke my pipe (I always feel all introspective and Sherlocky when I smoke my pipe, I swear half the attraction there is psychological). Other than that, it’s a normal normal night.

At work, I associate with a lot of “lifer” engineers. Some of these folks are the kind of engineers who got into the field back in the 80s and maybe even 70s. Sometimes I look at these guys, with their unkempt gray mops and their hands void of any wedding ring, and think about how there’s a chance they’ve never had, nor ever will have, a significant other. You can see the hard core singles: body gone to pot (not that I’m one to criticise) and exhibiting the social abilities and etiquette of a grizzly bear. You can watch the bits of pizza dangling from their coffee-stained moustaches dance as they reach around themselves awkwardly to scratch their ass or pull up their ill-fitting faux-demin elastic-waist jeans. Hear their loud guffaws across the cafeteria as their similarly-afflicted tablemates make a joke about the hot chick on Firefly or reference Daleks or John Cleese. Have these men given up? Reverted back to some closeted adult rehash of their highschool A/V club? I feel for these guys, even though they likely don’t know what they’re missing. Hey lifers: Buy a new shirt and practice using your wang!

Spent a good bif of my not-on-meetings time at work this morning listening to the non-transcode leak of the new Hold Steady. I never got into any of the Hold Steady’s previous efforts, so I came to this album as a virgin to their sound. Not knowing what to expect, but with a decent amount of anticipation due the near unanimous nutting of respected critics, I queued up the folder. What I heard sounded like a follow-up to Darkness on the Edge of Town or the E Street one. One thing is clear, this is rock and roll – good ol’ American rock and roll that just sounds like America. I’m still listening, and still mulling it over, but the immediate early Springsteen-likeness perked up my ears fairly fast. I think it’s gonna be a good one, much better than the disappointing Swan Lake leak people are also swooning about… I’m still kinda bored with that one. How can it not be better when it has songs called “Party Pit” with lyrics like “I’m gonna walk around and drink.” Now that, my friends, is American youth… walking around at parties and drinking, and that’s it… drinking and walking… walking and drinking. Some of these songs make me want to be “young” again. Amen.

Continuing the tunes theme, Pitchfork reviewed the new Decemberists, and rightfully gave it high marks. It’s an outstanding album, one that I didn’t take to immediately, but only out of shortsighted ignorance. After a few listens, the thing took on a new life to me, with songs that tell stories moreso than 90% of the songwriting out there today, and a slightly “bigger” sound than on their previous efforts. I love it now, and realize I was in denial before. We all learn in time, all in time.

Even though it took me a while, I did manage to get a “best of” collection of pictures posted from our 4×4/camping bachelor party for Ben last weekend. You can check out the snaps here if you’re so inclined.

Oh, and for some reason tonight I asked Sharaun what she’d think if I bought a pistol. She was surprisingly receptive, but stated that she’d want to go shooting several times to get comfortable handling anything we did end up with, and that she’d want us to take a reasonable amount of care in storing/securing/locking/whatever the gun in the house. I was pretty surprised. I’m not really rushing out to buy a gun or anything, as I’m only half-sure I want one, but I was kinda surprised that she’d be OK with it regardless.