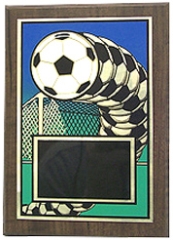 Tuesday night. Tonight I cleaned the cat’s litterbox, as it had taken to smelling foul. Now, I always clean out the litterbox, but I rarely clean the actual box. I took the whole thing outside, hosed it down and cleaned it with 409 then rinsed it. I hate to say it, but now that we have Keaton I feel the need to have a pet less and less. Not that I don’t like this cat, but I keep thinking about no cat hair, no cat food, and most importantly no animal using the bathroom in our laundry room. I know Sharaun would kill me for suggesting it…

This weekend, while Sharaun and I were cleaning out and organizing the garage, I came across a plaque I’d received in 1983 when I played for an AYSO soccer team as a rough-‘n’-tough six year old goalkeeper. I was terrible at soccer, as I am at any organized sport. Even at my tender age, I could tell that sports were nothing more than flashpoints of self-consciousness and humiliation for me. Born with no natural skills, and skin not tough enough to endure the training to acquire said skills, I gave up sports forever. It was a decision I still rue, as today it makes me feel like I’m lacking in one critical area of dudemanship. Maybe, if I had just stuck with it back then, while my muscles and mind were still malleable, I could’ve learned skills. As it stands now, the thought of organized sports strikes fear into my heart. I can’t swing a bat, I throw like a girl, and I feel like I’m alone on a stage of shame when I stand in a field of any kind. I’ve said before that I positively fear the day my son (who currently doesn’t exist) asks me to teach him to throw and hit, I’ll have to refer him to his athletic mother and retreat back to my computer. Oh… the embarrassment is almost palpable just thinking about it.

Anyway, I took the plaque and brought it to work. Hung it on the fabric wall of my tiny cubicle as a source of mock-pride. At least my season of soccer twenty-three years ago was good for a joke now. With its wooden backing, golden soccerball, and the misspelled team name in brass, my 1983 “Scorpians” soccer plaque is sure to bring a smile. So, to all those parents on the sideline who used to scream at me to “get up!” and “get in the game!” while I was happily sitting in the goal drawing in the dirt with sticks – y’all couldn’t break me.

Guys, before I go, I thought I’d tell you a story. Tonight I made one of my first legitimate online music purchases. Ever since I found out today that the band that made my 3rd/2nd favorite album of last year has a new “tour only” EP out there, I just had to hear it. After I consulted the “usual” places and came back empty-handed, I broke down and bought the entire album from galleryac.com. Go me for supporting the artists, or whatever.

One Reply to “y’all couldn’t break me”