Sometime Saturday the weather turned, and I wore my first jeans of the fall. Sure, I still coupled them with sandals, but that’s how I rock fall fashion y’all. We even got a cold rainy Sunday, a Sunday what found me asleep on the couch at a friend’s apartment – enjoying being asleep on a foreign couch, being warm inside while it’s cold outside, the sound of football in the background as I wake myself snoring, good company, a full belly. Womby, it was great. Sorry guys, it’s the music that makes me write like this – what music you ask? Well, only what’s possibly the most awesome album to hit my ears this year. For those who don’t care, the next full two paragraphs will be about this album, so you may skip ’em. Onward then.

Effing-A people, the new music boat docked at my place long enough this weekend to rub some electrons on the platters of my hard disk – and impart to me some gorgeous new tunes in digital form. Here I was over the last month or so, trying to make the days’ memories stick to my brain, but with no new soundtrack to aide in the process. The Killers’ and Polyphonic Spree’s album sections in my head are already at their allotted memory-to-music fill-points, so I’ve got stuff going in up there with no album set as a trigger. Damn shame. How shall I earmark the passing of these days? Thankfully, the indie world has heard my cry, and bestowed upon me a new batch of tunes. And I’m not talking mediocre here, I’m talking some of that instant-like stuff, love-at-first-listen kinda junk.

From the moment I right clicked the folder called “Funeral” and highlighted “Play in Winamp,” I was rapt. With every listen I become more engaged with this album by some group called The Arcade Fire. Seemingly tailored for me, made near-perfect to what I enjoy about music. It’s presumptuous sure, but I call this as being on my “best of” 2004 list come December. Other music came from God too, Grand National and AC Newman; both sound good – but I’m hopelessly in love with this Arcade Fire. The first song is about kids growing up in their Neighborhood (a theme stretched over four tracks), and talks about every kid’s dream of underground tunnels from best bud’s room to yours. Talks about walking around and growing up and, and, sorry, I just had an orgasm. Enough about this album, it’s that good.

I’m just about finished up with the graphic novels Kristi lent to me, Maus. Two-thirds of the way through the second volume. I’ve been doing most of the reading in the john, I keep the book there so it’s always handy. Sure, your legs fall asleep from sitting there too long, but I don’t mind. What a sad book. To think a comic book could move someone to tears. A grown man, sitting on the toilet, red marks on his thighs from resting his elbows there as he reads a coming book, crying. Crying while reading a comic book on the commode, must look hilarious. Ach! What do you know from funny?

This weekend was our going-away celebration for Steve and Ragan. It was a joint-effort between Kristi and Erik and Sharaun and I, a pretty nice affair. We did it at our place, and drew a pretty nice crowd. Food was eaten and drink was consumed, and hopefully our guests of honor felt particularly honored. Eventually, the fog machine was taken out, and last year’s Halloween supply box was raided. The result was a zero-visibility black- and strobe lit garage, which was a big hit. Somehow the party ended with three guys, me included, playing Mike Tyson’s Punch Out! until 3:30 in the A-M, which is odd to me- but was great fun. Somehow sometime during the evening’s festivities, Steve ended up taking out the shower curtain – and what’s even better, it was caught on camera: 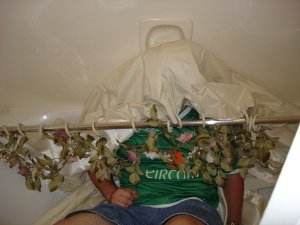 Prior to the party, I had originally had plans to go skydiving with the crew. However, upon hearing the appalling way that fat brothers are treated at the skydiving place, I chose to stay home. Being that I’m a beefy 240lbs, I’d’ve had to pay $40 extra to jump, and they’d’ve only taken me to 6000ft vs. the 14,000ft everyone else got to jump from. No thanks. I’m not gonna ride in the “special plane” to make a “special jump” at a paltry 6000ft. I play it off funny, but it does kinda run up in ya like a knife.

Found this site this weekend, linked from /., and I love the idea. Now, why can’t I ever be this creative? Tomorrow it’s an early trip by jet over to San Jose for another day of presenting, you know I can’t wait. Dave out.