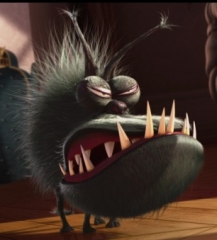 No, I mean a baaad dream.  The kind you used to have when you were little and you were being chased by skeleton and you were running for your life and you woke up just as he was about to grab you with his bony fingers – only to see him, to really see him, standing there in real life at the foot of your bed.  Of course, he wasn’t really there, you were still dreaming or in some half-dreaming/half-waking state where you haven’t quite shaken off the residuals.  Oh… do you remember the fear?  I do, friends; I do.  One time there were sharks “swimming” around on the ceiling above my bed, like I was looking up at them from somewhere deeper underwater.  I was terrified because I knew I was awake. The dream was over but here were my dreams, crossed over to haunt me in real life.  It’s the fear come alive.

That’s the kind of dream Keaton had, and it really got her twisted.  Bedtimes have a foreboding quality not unlike the bygone “bedtime hell” days of 2009.  She’s genuinely afraid of her room.  See, it was a pretty traumatizing dream: She awoke because she heard a noise, a growl – the growl of a monster, a sound that any kid knows.  Wanting to be brave, she boldly growled right back.  It was then that the monster, according to the story, a story which is consistent and has never varied even in one tiny detail over repeated re-tellings, replied with two short grunt-like noises.  Immediately after, it jumped on her bed and popped up from under the covers.  It looked like the dog-thing Kyle from the movie Despicable Me, I hear.  This is when the screaming started.

It was 3am and I was dead asleep.  Keaton’s scream ended that instantly.  It wasn’t a “normal” bad dream scream, it was a horrible pure-fear kind of thing that registered deep in some primal part of my parental response center.  Before I really knew what was going on I’d tossed aside the covers and was running towards her room, calling to her that I was on my way as her screams frayed and tattered with fright.  As I turned the corner into her room I half expected to see a real problem – the terror in her voice was palpable and it got my adrenaline running hot in the seconds between our room and hers.  But it was just her, screaming, legs held in the air so not to touch the bed (from whence, I’d later learn, the monster had sprung).

She slept the rest of the night with us and I thought that’d be it.  Nope.

Sharaun texted me at work the next day, “Tonight is going to be tough; she’s too scared of her room for quiet time.”  I hadn’t even thought of it.  That night was tough.  That was last night.  Tonight was tough.

We tried a lot of things.  “Bravery gummies” for naptime (Sharaun’s idea, think of them like when you used to pretend Smarties actually made you smart).  A “bad dream alarm” plugged in and running (Dad’s idea, an unused ethernet-over-powerline converter with blinking lights that could easily indicate dream-warding).  Prayer.  We gave her a good set of options and tools, I thought.  Nothing really worked.  Tonight, in fact, she just wore herself out.  Under thread of cancelled playdates tomorrow and numerous attempts at cold rationalization (“There is no such thing as monsters, and you know that”), she finally collapsed on her bedroom floor near the door (the monster lives, somehow, in the bed… so it’s the worst possible place to be).

I can remember bad dreams.  Poor thing.  But this cannot stand.

One Reply to “a sound that any kid knows”