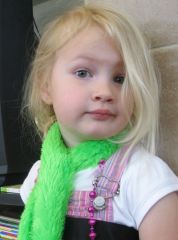 Saturday night my iPhone and I went for a swim.

Well, not on purpose…

See, Keaton was sitting in a chair with her back to the pool, eating an apple.  We were at a poolside birthday party and the swimming part had ended with the sun going down, so I was out of my trunks and back into my shorts and t-shirt.  And, properly dressed, I also had my iPhone and wallet in my pocket.  The scene was set.

Playfully, I approached Keaton under the guise of the Tickle Monster, arms outstretched and growling slightly, fingers clenching and flexing just looking for some good ribmeat for ticklin’.  I remember her smiling as I approached, shrinking back into the chair, and sticking her feet out to push me away.  Only, Newton’s 3rd law says that, as much as little Keaton’s feet pushed me away from her, my thighs pushed back on them in equal proportion.

Yup: Her chair leaned back and toppled.  And, in a flash, I could see the chair sinking into the shallow end of the pool, and remember vividly seeing Keaton’s arms reaching wildly for the surface and her hair billowing in gravity-free plumes under the water.  Although it seemed like slow motion, my next awareness was being in the water.  As I grabbed her under the armpits and hoisted her above the surface, she had her mouth open and I could see bits of chewed apple inside.

She was crying, but not gulping or choking or gasping; I honestly don’t think she had enough time to even try to take a breath before I got to her, and that she likely held her breath that long on instinct alone.  She clung to me and dripped.

Sharaun was standing next to me in the water, I actually think she beat me into the pool (also fully clothed) but couldn’t get to Keaton for the chair.  Immediately after pulling her out of the water Sharaun wanted to take her from me and hold her.  Without thinking I passed her over, knowing already that she was fine (if a little shook up), and began climbing out of the pool.  Only then did I realize…

… the iPhone and wallet were still in my pockets.

I pulled out the phone and checked: dead.  In an attempt at playing humor for the watching folks, I chucked it into the grass in front of me – visually acknowledging its new uselessness.  In that moment, my thought was that my daughter was safe (if a bit wet) in the arms of my wife behind me – and a work-purchased iPhone was a small price to pay.  (Of course, in the next few days I’d try like crazy to resurrect the thing… fruitlessly, I might add.)

Monday I went down to the Apple store and got a new phone.  $199 later and I’m back up and running.

Worth every penny (not talking about the phone).

2 Replies to “worth every penny”