Hi folks and welcome to You Decide Friday #3. This week, the winner of the poll, by a landslide, ending up being: “A humorous analysis of some high-school notes between Sharaun & I” (Ten votes is a landslide? Oh man, I need more readers). Anyway, I guess I don’t need much more exposition than that… so here goes.

You guys remember high school, right? Man, I sure do. Not getting into it too much, you should be able to tell by the abundance of high school era stories I post right here on sounds familiar that I had a pretty memorable four-year stint there. As everyone knows, teenage romance is the bread and butter of high school drama, the planet around which those fledgling emotions orbit and swirl. And, what would teenage romance be without the between-classes note exchange? The embryonic love of high school is a fragile thing, barely able to stand the forty minute breaks from each other as required by the bell schedule.

I’ll ask that you read these old notes with the former mindset. I mean… it’s not going to help really, they are still grotesque.

And, I need to be up-front with you guys here: On Tuesday night I dragged two old dusty cardboard boxes out of their resting places high and out of the way on shelves in the garage. One of these boxes is mine, the other Sharaun’s. Both boxes contain roughly the same things: a bunch of notes and other bric-a-brac from the halcyon highschool days of our budding, now going on fifteen years, romance (if you count highschool, which, after this, you might not).

Since it was already apparent that the highschool notes option was going to win this week’s contest, I figured I bet set about poring over the reams and reams of wide-ruled paper we’ve both held onto for so many years now. And, oh and this is the part I needed to be up-front about, it was a disgusting task. I’m serious. These notes are terrible. They are awful. Cringe-worthy. Emetic even. Honestly, as I glossed over note after note, revisiting each from within its pocket-sized quartered folds, I began to wish we’d never kept them at all. Well, maybe that’s not true, but they are certainly embarrassing, to say the least.

First off, it’s highschool, so of course Sharaun and I could barely contain the red-hot urgency of our love – a love the likes of which the world surely had never seen before. In fact, we used the word love so much, and with such conviction, it’s sickening. Other than the every-other-sentence professions of undying cosmic love, most of the notes were about how one of us shouldn’t talk to some other guy or girl, or flirt with this person or that, and quite a few were me apologizing for being lecherous.

Seriously friends, I had to read through so much pure and utter shameful crap to find a couple missives I could use… it was an exercise in patience. In the end though, I found what I think are some comical exchanges betwixt the Sharaun and I of fourteen years ago.

The notes I chose aren’t direct responses to each other, although that would’ve been easy to do. Know why? Because, in addition to passing notes between class at school, Sharaun and I also instituted something we called a “log.” The Log was a notebook that we traded off from one to another each day, and took home with us every other night. Each night, either Sharaun or I would write to each other in the notebook, logging our “in” and “out” times. In the morning, we’d give the log to the other, who’d read it and take it home to write and repeat.

Over the course of the first year or so we were together back in highschool, we filled up three ruled notebooks this way – and still have them all. They are, in a word, ghastly. But, I can manage to look back on them with fondness – because they are documents of a time gone by where I was pretty dang happy. In addition, I kept my own personal relationship journal-type thing (which I wrote in every day, go figure) for the first few months we dated. I had forgotten about that until I opened the box the other night… ugh.

Anyway, the notes I chose aren’t direct responses to each other (did I say that already?). They also aren’t presented here in their entirety, I had to cut the things down to try and get just the interesting bits – so if the portions I present seem somewhat disjointed, it’s because they are. Anyway, my criteria for choosing them was pretty much based on how much I thought I could make fun of them here on the blog, so I purposefully chose the ridiculous and overly inane.

Let’s start with my letter to Sharaun, because, well, honestly, it’s the worst of the two. Here we go, hope they’re not too hard to read…

Ahh, right off the bat we’re talking jealousy. For a relationship seemingly cemented together with a passion so undying, we sure didn’t seem to have a lot of trust in each other. I don’t really know who I was chastising her for hugging, but I love that my suggested solution to her was to stand like a stone while being hugged, rather than reciprocating. What a way to open a letter, right? Oh man… highschool… Moving on.

Oh, wait… what’s this? Apparently, I was also guilty of hugging someone (our highschool must’ve been a regular hugfest or something). At least I am big enough to commiserate, although I do manage to mention that I actually had to watch Sharaun’s scandalous embrace, whereas mine was more tastefully clandestine. Let’s keep wading through this crap, shall we?

Oh, here I’ve apparently made peace with myself, and am now laying on the love. Let’s see how long I keep up the nice-guy stuff…

Wow. What a jerk thing to say. Basically I’m saying, “I have tons of chicks on my jock, and I’m sure happy you’re not as wanted as I am. But, don’t worry, I don’t flirt with them… even though they’d totally do it with me if I said the word. Glad you’re not as desirable, I couldn’t handle it.” Reading through these notes makes me wonder why in the world Sharaun ever even gave me a shot.

“Rockledge Central” was an unfinished business park that was paved into a dead-end cul-de-sac. We used to drive down there into the dark and the trees and “park.” Notice how I kinda slip that one in there as the last option, as if it weren’t really the first and foremost thing I’d want to do. Sly, ain’t I?

No words… no words.

“Gay-ass fool?” Man, I bet the women truly were lining up.

When I read this stuff, I can actually almost remember feeling and acting like this jealous and possessive highschool kid. I’m not sure if everyone’s highschool relationships were like that or not, but ours sure was.

Once again I seem to be tooting my own womanizing horn. What a catch. How did I ever keep them off?

I’ll leave this to interpretation, but I almost puked up my dinner when I sounded it out. Oh my Lord we were sickening.

So, that’s it. I made it through. Time to collect my thoughts, remember I’m in my thirties and that this was a long time ago (I used to think we were so mature…). Now then, with my head cleared of that foul business, let’s move on to Sharaun’s note to me. This one was taken from one of those “log” deals I talked about above, you can see the in/out time-logging at the top. Ugh. 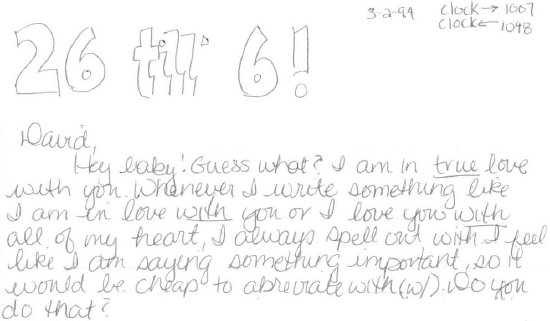 I just want to run away and hide. It’s that bad, right?

OK, something interesting. Sharaun and I used to stay up all night talking on the phone. We’d stay up well into the morning, sometimes “talking” for five or more hours. I have no idea what we talked about, but more than one time I remember falling asleep on the phone together. Eventually, Sharaun got caught talking to me in the middle of the night. In fact, the resulting phone ban was what started the whole “log” back-and-forth thing – a kind of alternative to being able to talk all night. On some nights, though, she’d manage to sneak the phone into her room and make secret calls to me in the wee hours. This didn’t wake my parents because, when I got my first computer back in ’92, I had decided to pay for a private line in my bedroom so I could monopolize the phone with my dialup Prodigy account. The five dollars per month was totally worth being able to surf the nubile WWW, which I was already addicted to.

Hahaha. Wow. You know what they say about flattery…

Here she’s talking about what we’ll bring with us to the beach when we go some night in the future. We used to tell her folks we were going to see a movie and then drive down to the beach and find a nice dark spot to spread a blanket and make out. Awesome, right?

We really did love talking on the phone…

Oh hey, this portion of the note makes for a neat sideline story…

Once, Sharaun’s grandmother found a note from me Sharaun had inadvertently left in the pocket of her jeans. No problem, right? Only thing was, in that particular note, I was joking around about Sharaun being pregnant – I mean, I was writing about it as if it were true, but Sharaun, of course, knew it for a joke. Anyway, Sharaun’s grandmother freaked out, called Sharaun’s mom (who immediately knew the note for a joke and did not, thank the Lord above, involve her dad). Needless to say Sharaun’s mom was not happy with the note, nor the “coarse” language I used in it (as was a habit of mine back then).

In order to avoid a similar situation again, and to add a layer of security to notes of a “sensitive” nature, I taught Sharaun the code Kyle and I had discovered, and subsequently broken, in the underground tunnels of Astrokalickrama (if you’re completely lost after reading that last sentence, catch your ignorant self up by clicking right here). She’s not using it to mask anything bad here, she must’ve just been keeping in practice or something.

Well, like I said – I had to cut them down a little, but that’s it. I’m not really sure how I feel about this one… as a blog entry I mean… for some reason I’m half tempted to trash the entire thing. But, it’s here now, and it took a loooong time, so it’s staying. I mean, it took forever to write. In the end, I got tired… and likely sloppy. Sorry. I don’t even know if I like it after all that work. Also, I’ve done something like it before here and here and maybe even here. Whatever.