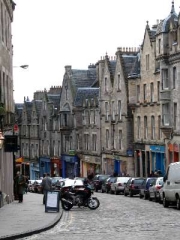 Feet on the ground in Duetschland. Picked up my Mercedes E-class and hit 200km/hr on the autobahn between Munich and the hotel. Sunroof open, radio tuned to the local “hits” station. Funny what you’ll listen to when the alternatives are slim. I found myself quite enjoying some Prince and Fine Young Cannibals. Well, OK, I really only enjoyed the Prince – I was just too damn nervous to fiddle with the radio while going 200km/hr. It’s a gorgeous day here in Bavaria, the sun is out and the sky is blue. Germany is is just as gorgeous as I remember it being last year this time. I honestly think I could pick up and move here, I really like it that much. Maybe it’s the German bloodlines of my family calling me home, but this place is like fantasy-land to me. Meat-loving, beer-loving people who enjoy being outdoors, driving nice cars, and value efficiency. Yeah, these are my people… where do I sign up?

The flight was so-so. I sat next to a hulking German man who kept trying to elbow his way into my space. I also got screwed with a window seat, which, actually, didn’t end up that bad as I could lean my head against the wall and try to sleep. As for sleep, I got a little, but it was less than ideal. The movies they were showing were still the same batch I saw going to Shanghai last month, so I tried to nap then. Finally, for some reason, I wasn’t in much of a music mood. I couldn’t find anything that sounded right, nor that I wanted to listen to. Finally I settled on making a playlist of a bunch of Silver Mt. Zion albums and just putting it on random. And, some eleven hours later, it was over.

Speaking fog flying: Sometimes I wonder, as the plane I’m sitting in banks for a hard turn and I can look down the length of the wing at the near-perpendicular ground below, how come the thing doesn’t just “slice” through all its lift and simply fall out of the sky. I had a friend once who was fascinated that ships as big and heavy as modern-day aircraft carriers manage to float. To her, something that heavy just shouldn’t float. That’s kinda like me with airplanes. Although I learned in school just why they really do stay in the air, I’m still amazed that they actually do. A little floating village, brilliant.

Well, it’s time to off and get some beer at the local brewpub down the road – I’m tired of waiting for my fellow traveler to wake up so I’m just gonna go get it done.

Until tomorrow sometime then.