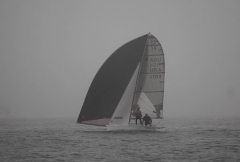 Friday Friday Friday! Dave love the Friday. Burned the better part of the post-work daylight today working in the front yard: mowing, fertilizing, trimming hedges, checking sprinklers and weeding. Yard looks much better for it and I feel like I did something constructive.

While I don’t usually do celebrity gossip stuff, I am willing to link a funny story if it’s related to something I care about. So, continuing the Scientology bashing theme from yesterday, here’s the comical tale about some famous folks’ heated run-in with a dude wearing a “Scientology is gay” t-shirt. Good story, and, where can I get that shirt? Come to think of it, it’s eerily similar to a shirt I still want to make, but don’t have the artistic prowess to illustrate. Anyone who has some basic drawing skills and wants to help me realize my multi-religion-bashing concept tee, hit me up and we’ll do lunch.

As July approaches, and August after, my mind begins to drift to this year’s Halloween prop. Last year, Kristi made a great suggestion to do a backlit scene on the lawn with a large glowing moon and animated wolves in silhouette, complete with scary baying sound effects. I simply adored the idea, and the concept seemed relatively easy to realize: 2D wooden wolf coutouts with hinged parts for movement, some kind of illuminated orb shaped from pipe/wood, and a simple motor to animate the thing (I have an ice-cream churn we never use which I can adapt). Now, don’t get me wrong, I think this is an excellent project – but it sounded relatively “low touch” in terms of effort (of course, I’m probably wrong about that) and that prompted me to start daydreaming about a second, more involved, prop. Two props in one year, can it be done?! As my mind drifted on the 2nd prop idea, I centered most of my concepts around air-power, which I switched first experimented with (quite successfully, I might add) on last year’s “pneumatic coffin-popper” project. Air power is so clean and easy, no electricity to deal with, no AC-to-DC rectifying, no relays or geared motors to wear out – just a compressor hidden away in the garage, a hose, and some cylinders.

So, air-power on the brain, I began to revisit an idea I’d had a while ago which was based on a “twitching, hanging-from-the-gallows” prop I’d seen somewhere on the net (and has since disappeared, I think). The hanging man always intrigued me, I think mostly because I imagined the hinged limbs moving in a slow-but-frantic, almost electrocution-like, way. Powered the way I imagine it, the whole thing would be quite random, the movements not based on repetitive motorized actions – instead only being “motivated” some force, the actual movements themselves being completely spontaneous and organic. I love the concept, but was kind of turned off by how macabre I imagined the final result. While I love Halloween, I’d like my display to at least remain kid-friendly scary… and besides, in these politically-correct times I’m actually a bit leery to actually place a “lynched” dummy on my lawn.

So, keep the concept but scrap the noose and gallows… what could I do? Then it hit me, a scarecrow. Scarecrows are very Halloween to me, and the scarecrow in my concept is a lot gruffer than your goofy Wizard of Oz variety, I imagine him with a twisted sneer or something. A scarecrow writhing to get off his pole, kicking and flailing… yeah, I love it! Here’s a brief concept description and sketch I made today with all my enthusiasm:

Here’s a sketch I did, it was in color, but I don’t have a scanner and the only one I have access to only does black and white. You can probably figure it out anyway. 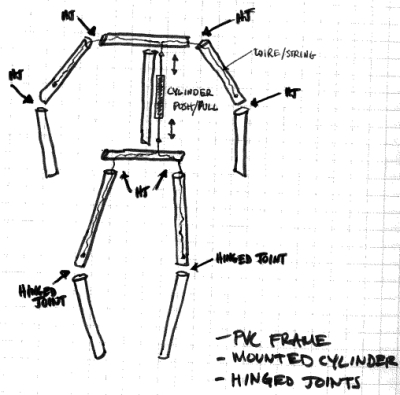 One thing I do want to do is begin documenting my projects better. I’ve even considered a page devoted to them, with details and through processes like in this entry. Ambitious, I know, but a guy can dream. Anyway… I’m not saying it’s ready to design, maybe a few more weeks o’ thinkin’, but it’s got potential!

Changing subjects… did you see the strange comment yesterday on the “satanic flier” entry? (Remember, the “satanic flier” post is consistently my most read post, averaging 30+ reads per day.) I originally pegged it for a random-letter spam filter test, but was intrigued when a Google search for “zwaml” turned up a ton of hits. Though none of them in English, most of the results were in French, some German, and some still appeared to be a phonetic version of Arabic or some other script. Intrigued, I looked up the IP address of the poster, which turned out to via a system based in Mauritius (it’s OK, I had to look it up too). AfriNIC, the Internet Numbers Registry for Africa, is based in Mauritius – leading me to believe the commenter was commenting from somewhere in Africa. Some more digging, and a few other searches seem to indicate a link between the word “zwaml” and the Kabyle region of Algeria, where they speak their own language: Kabyle, which is a Berber language.

Look, people, I researched this for hours last night. My conclusion? “Zwaml” is a slang word in some Berber-based language, it refers to a type or class of people and is derogatory. I also think it is a semi-localized term, being used primarily in the Berber-speaking regions of North Africa, and can be alternately spelled in English as “zwamel,” don’t ask me why.

Bottom line? I think I’m being called a name.

In other other news, I recently found out that the blog that started it all for me is now back online – and has been active again since sometime late last year. Glad to see it back, it really was my inspiration (oh, and please forgive the linked entry… it was only my 23rd of blogdom – cut me some slack).