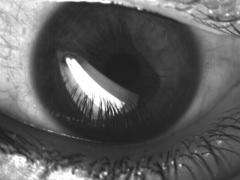 I stayed up late to watch the season finale of Lost, and because I have no work to wake up for tomorrow – just a 10am appointment for Lasik surgery. I’m ready; ready to see. I had like four paragraphs written, but they were all boring so I’ve moved them into the bin, where they’ll get appended to shorter entries over the next week. For tonight, however, I have nothing much at all. I wanted mainly to write about how anxious I am to get this surgery done – not anxious/nervous… more anxious/excited. Maybe tomorrow sitting in a room awaiting the laser… maybe then I’ll be more nervous than excited, I dunno.

The surgery is at 10am, should last about one minute for the whole thing (cornea-cutting and eye-burning), but there’s probably a half-hour to hour of waiting and other “prep.” They dose me with some kind of sedative prior to going in, so they’ll need at least time for that to set in once I’ve arrived. The, I’m off home (Sharaun as my driver) to sleep it off. They recommend as much sleep as possible immediately following the operation, as there can be some discomfort as the anesthesia wears off – but apparently not enough to wake you if you’re sleeping. So, I plan on sacking it out for as long as possible post-op – although I’ve heard that with some folks you can even see an improvement as soon as walking out of the doctor’s office, albeit a haze-shrouded improvement.

They told me I’d be able to go to work as normal Friday, even drive myself in.

One Reply to “fingers crossed”