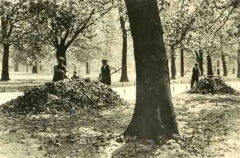 I’ve truly, truly got nothing today… debated even posting what little I did have – mostly cobbled together from one-sentence notes I hadn’t had the time to develop over the week. Tonight some friends were over, part of the feed-the-new-parents drive. While here, they held and heaped praise upon our new daughter. After they left, we both talked about how much we love hearing people fawn over her. I swear I can already see her changing: bushier eyebrows and longer lashes, fuller hair and a rounder face – and more active all the time. And, anyway, she’s deserving of such prattling on – I’m convinced.

In part, I hate that awesome albums are always so short. Then again, maybe the shortness actually helps with the awesomeness… afterall statistics do dictate that the more music there is, the better the chance some of it will blow. Short and sweet, maybe that’s what it’s about. Anyway, this new Tapes ‘n Tapes album is short, I mean, like, I listened to it maybe… 700 times today, so much that I now hate it – to death. I seriously don’t want to hear it again until listen 1 of 700 tomorrow morning ’round 8am – and that’s no lie.

Know what I hate about the iPod? I hate that, after playback has been paused, hitting the play/pause button doesn’t immediately restart playback. Nay, it instead “wakes up” the iPod, whereupon it returns to its paused state. This means I have to hit play/pause twice to make the music happen again… and that’s unacceptable. Hey Apple, you think I have time to hit buttons twice? I’m a busy young guy, money to spend, and fickle tastes – show me a digital music player where the buttons do what they say on press #1 and I may just take my dollars elsewhere.

I don’t want to write, don’t really even know if I’m gonna end up posting this. Goodnight.