I guess the weekend seemed long.  We got a lot done… both social and around the homestead.  For that I’m thankful.

Saturday Keaton and I put up the Christmas lights outside.  We went all-out this year, using three separate circuits and illuminating the trees and bushes.  Well, I guess by today’s “all-out” standards for Christmas lights we’re still bush league – but it’s considerably more than we typically do.  Keaton, as usual, was a trooper and stayed outside with me the whole time.  I really do love the way she likes to help me “work,” it’s super endearing and makes me feel all big-time.  A week or so ago I overheard her telling a visiting friend, “You know, my dad built this whole house!”  How awesome is her faith in dad?  To her, why couldn’t I have single-handedly built the house?  After all, I’m dad.

It’s one of those night where I’m the king of the castle.  On my own with both kids while Sharaun’s off with girlfriends.  In fact, I had the kids “on my own” quite a bit this weekend, for one reason or another.  It’s nice, sometimes, to get a small taste of what Sharaun’s kid-centric days might be like.  I don’t know if I’m cut out for being Mr. Mom on a full-time basis, but I do like to tip my own hat to my reflection when I have a successful daddy-daycare weekend and am still able to get things done.  Sharaun would laugh, I bet, hearing how much of a triumph her everydays are to  me.

So anyway I’ve got the night to myself.  I’ve been in a strange music mood today, starting with a morning of blues from a Chess Records retrospective and then onto Tim Buckley in the afternoon.  Then, for whatever reason, I felt like some cool jams in the evening so I put on Todd Rundgren’s one-man show of Something/Anything? to give me those early 70s vibes.  What?  You’ve never heard Something/Anything?, oh man… get yourself to school you Philistine!  But I’m not kidding.  In real life you should hear this record before you die, especially if you weren’t around to hear it when it hit the scene in 1972.  Go ahead, Grooveshark has most of the tracks – even if they are out of the right running order.

I guess that’s it for tonight.  Goodnight. A nice long week in Oregon, away from the hustle and bustle of whatever it is we do on a “regular basis.”

We had a great Thanksgiving.  Spent some much-needed time with family.  Grammy and Grandpa watched Cohen one afternoon while Sharaun and I took Keaton to see the new Disney movie Tangled (which, by the way, I truly enjoyed), and then watched both kids another evening so Sharaun and I could have a nice dinner together.  We needed some time off as a couple I think, I it just reminded me that we have to make time for that more often.  We grabbed some Thai food and bummed around the mall for an hour or so… the kind of “old people” date we’ve come to accept as what we now enjoy more than $12 cocktails, barstools, and thumping bass.  As we trod the aisles of the Hot Topic, lamenting the capitalistic misappropriation of our youth, we happily agreed that we are now “parents” and are fine with it.  Old-people dates: best enjoyed tepid.

I thought today about how the year is already almost over.  Over!  I sometimes don’t understand how time moves so quickly.  Next week I have a mandatory all-day training that lasts three days.  That’ll kill the week.  Two weeks after that and we’re off to Florida to ring in the new year for another couple weeks.  I’ll be a blur, like it always is, and then it’ll be next year and we’ll be racing to Keaton’s birthday and all the other markers that we measure.  I sometimes think I “conceptualize” the passing of time in the wrong ways.  It almost feels like I think about time “in between” these milestones, and sometimes miss what’s happening day-to-day in between.  I’m always thinking about what happened “between” this thing and that thing… I want to start thinking about how long each day itself is – what we can do with the time that’s right on top of us.

It’s 18° in Oregon and I’ve been cozied-up on the couch at my folks’ place since Monday night.

I had to work yesterday and today, and since a good portion of folks are already on vacation I found myself busier than I expected for what was supposed to be a couple of “slow” holiday workdays.  I found myself feeling guilty, which is wrong, but I had this notion that these would be “easy” working-from-home days and I’d be spending time with family moreso than turning the millstone.  My fault really, if I’d really wanted a vacation I could’ve burned the days instead of trying to cheat them out.  Maybe today will be better.  Maybe it’ll teach me the rest of my lesson.

We got in Monday night around 7pm after a little more than an hour of flight delay.  None of us were groped, scanned, or otherwise molested by the TSA – security was as it’s always been and altogether uneventful.  My mom had a late dinner prepared and waiting for us, which was much appreciated.  Keaton, being excited to finally be at Grammy & Grandpa’s place, was granted a “stay up late” night and got to play until around 10pm.  At about 9:30pm she peeked out the front door and announced that it was “snowing hard.”  Already in her pajamas, she ran to get her shoes and jacket and we both went out into the driveway (me in shorts, an undershirt, and slippers) to make prints in the newly fallen snow.  She really likes that less-than-an-inch of snow.

I’ve got my sights set on Thursday for some turkey, beer, and football.  Brother’s coming over with his wife and the new niece we’ve yet to meet and I’m anticipating an incredibly lazy day spent reading, continually nibbling, and hanging out.

Sharaun posted this on her Facebook the other day (I know because I lurk), so it’s nothing new to the internet – but I love the drawing so much I wanted to share it here.  I don’t know if it’s as awesome as I think it is, but I’m impressed with the skills of my not-quite five year old up in here. Above is a drawing of our family, done by Keaton this weekend.  Please note the details:

Other things I love about the drawing:

One day I hope to show this to her when she’s older… so cool.

Good morning internet.  I’m stiff and sore from getting out and putting up all the Halloween props and decorations so I’m just going to post the best of the bunch from the newest pictures. 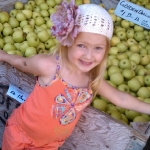 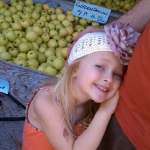 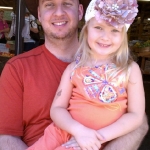 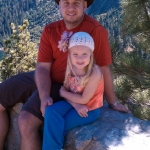 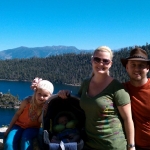 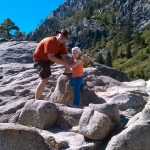 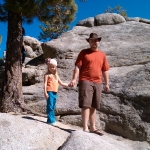 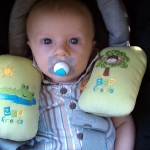 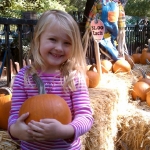 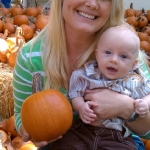 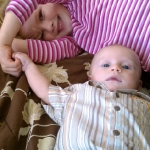 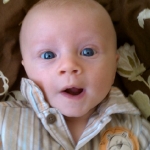 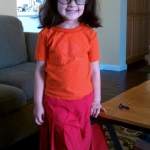 I’m sorry I don’t say “I love you” when we’re ending our phone conversations.

I have no real idea why I don’t, and almost every time I hang up after talking to one of you I regret not bidding you a more meaningful farewell.  Sometimes, when I’m saying whatever I do say, which is usually something like, “Well, just wanted to call and see how you’re doing… talk to you later,” the absence of the “I love you” seems glaring and awkward.  It bothers me that this doesn’t come naturally to me, that it sounds strange when I say it in soliloquy.

Once, when we were visiting you guys, I’m pretty sure I heard you say, “I love you too,” when you were getting off the phone with John.  Ever since then I’ve been disappointed with myself because apparently my little brother can manage to say, “I love you,” but I can’t.  I hear Sharaun tell her dad, “Love you daddy,” as they end a conversation, same with her mom.  And then I go and say something like, Take care.”  What a cop-out.

So starting now I’m going to begin telling you I love you.  At the end of phone calls, when we part ways on the sidewalk outside the airport, after Thanksgiving dinner… I want to be like a normal kid who says normal things like that to his parents.

Do me a favor and don’t make fun of me when I do it for the first time, OK?  It may actually be fairly difficult for me to break the habit of not saying it; tough getting around the strange awkward feeling I have as I begin to after having not for so long.

Talk to you later; take care.