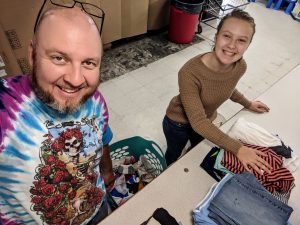 Dude walks in, 6ft tall and then some.  Gray hair, missing on top but still a bundled into a ponytail in back.  Sweatpants, too big.  Two front teeth nowhere to be found.

Seeing my Grateful Dead shirt, “The Grateful Dead?”  Without giving me time to respond, I watch him pause for a moment to look me over a bit, which I assumed was him getting a mental fix on just how old I might be.  Then, like an old friend, “I have a Grateful Dead story for you.”  I’m intrigued.  I show as much on my face and make the right noises to spur him on.

“I don’t really like the Dead; has nothing to do with their music either, I like the music.  I’ll tell you.  I grew up in the Bay.  Back in… oh… ’69 or ’70 or maybe ’71 I saw the Dead at the Avalon.”  I make some happy/encouraging response, we’re talking classic stuff here… some of those shows are legendary.

“Anyway, there was this big barrel of water at the show.  I had two, maybe three very small cups, and I was shot.  The Dead put acid in the water; spiked it.  Without my permission.  That’s just not cool, man.”  I agree that dosing someone unbeknownst to them is, definitely, not cool man.

He told me more.  About being so loopy he sat behind the wheel of his Volkswagen bus and couldn’t will himself to drive.  About living in the Bay.  About seeing Quicksilver, Canned Heat, Airplane.  About selling his parents Silicon Valley home for $1M after they died, the home they bought for $16k and that’s now worth $2M just six year later.  About working for Coors for 20 years in Colorado (“I was a liar and a drunk then, though; was a different time.”)

I have no reason to doubt my new buddy.  So what if he mis-remembered where the Dead’s infamous “acid punch show” really happened, I like to think he really was there and really was too messed-up to get his bus moving afterward.

Laundromats have consistently been one of the most unpredictably cool and interesting parts of our previous trips, and this one is proving no different.