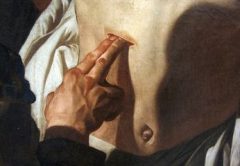 A few days before my dad passed away (two years ago now and a story which, if I ever really get back to this, I’ll surely write in detail), he relayed to me an amazing dream he’d had.

Near the end of his life, I began writing down and recording the things he said, particularly when I thought I might forget them or that they were especially valuable.  As he relayed the below, I cribbed it into my phone, in outline form, attempting to be inconspicuous about it for fear of breaking his concentration.

For the first time, I’ll attempt to turn that outline into something more readable.  It won’t be perfect, because there is a lot of context to that last week or so I’d need to give to really set the stage.  But it’ll be OK, I think.  In fact, maybe it’ll be better without the context.

In his dream my dad had died and arrived in heaven.

He told me that, upon arrival he was greeted by Thomas, disciple of Christ.  Thomas was with him in a room with many doors, each one numbered.  In arriving, dad had come in through door #14, that seemed important to him.  Thomas explained what my dad called “the truth about heaven.”  That truth being that each of the numbered doors represented an alternate reality, what my dad called a “layered multiverse.”

Dad relayed Thomas’ words, “Through each door are alternate yous in alternate worlds.”  Thomas explained that humans have been seeking to understand and explain these multiple realities for eternity, and their attempt, and ultimately inability, to do so was the genesis of the various religions of the world.  Several had got certain parts right, but none got it perfect.  Thomas noted that the physicists of the world were the “truest” priests, and that they were very close to truly figuring things out.

Finally, Thomas asked my dad if he had any questions.  Dad wanted to know four things, in the following order:

Before I get to the answers my dad got from Thomas, let me break narrative stride for a moment (that is, if I ever had it).  Yes, dad said the words “layered multiverse.”  Here was my dad mixing things he loved, misunderstood, desired and feared… all jumbled.  His love of science and science-fiction, his misunderstanding and fear of Christianity, his desire to have had more time with his mom & dad, his feelings about his current condition.  When I reflect on the dream he relayed to me, it is simply dripping, overripe, with what I imagine was in his head in those last days…

So, according do dad, how did Thomas respond?  Like this:

In his dream my dad had died and arrived in heaven.

In real-life, he would only live another few days.

One day I’ll write about it properly.

One Reply to “dad’s dream”