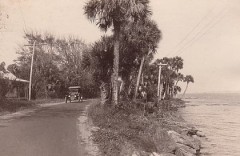 Yesterday Keaton and I decided to walk down to the little “old town” area.

Not too far from the in-laws’ place, the walk there is an enjoyable one flanked on the right by the Indian River and the left by a row of riverside houses which are always fun to ogle and envy.  The weather was inviting, too, and is part of the reason I proposed the trip.  We’d walk down to the little park (the same park where the Santa incident occurred three years ago), kick rocks on the playground a bit and then stroll through the gentrified shopfronts and maybe get some stocking-stuffers for mom.

On the way down Keaton was being Keaton.  “The wind feels so refreshing in my hair, dad,” she said as she tossed her (somewhat tangled) locks.  “You know, I think I was meant to live in Florida.  Do you think we could live in Florida sometime?”  “Meant to live in Florida?,” I asked, “What do you mean?”  She explained that, since both mom and I were from Florida that it was like she was supposed to live here.  The concept of destiny may be above her, but that’s pretty much what she was describing.  I told Sharaun’s mom about the conversation and she was encouraged.

We picked flowers and dodged fire-ants (currently Keaton’s #1 fear in the sunshine state) and even made a stop at the local magic store to nose around.  And once again this morning Sharaun’s left me with the kids to go shopping (her perpetual pre-Christmas Florida activity, not that it bothers me – being that it relieves me of having to do the same), so I’m thinking we might make a return-trip but this time with Cohen in tow.