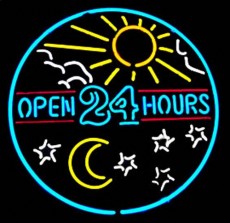 Man the weather here is refreshing.  Something about the air here at the in-laws’ place: fresh coming off the water and just a little touch of Florida humidity but without the oppressive heat and density of the summer months.  Christmas-time in Florida really is an excellent clime.

Our trip out was disastrous.  We woke at 3am to catch a 6am flight out of California, and that flight was delayed by all manner of things for over an hour (with us sitting in our seats on-board).  This resulted in a missed-connection at Denver and the airline auto-re-booking us on a 6pm flight later that day.  Not wanting to spend eight hours in the airport with two kids, we tried standby on a couple earlier flights with no luck.  Eight long hours later, as 6pm finally rolled around, turns out that outbound aircraft had issues.  Another hour and a half and a new plane later we were finally on our way.  We pulled into the driveway here at 2:30am Florida time, nearly twenty-one hours of travel time after our west-coast departure.  Poor Cohen didn’t sleep the entire time, stubborn little man that he is, and was wrecked for our entire first day here.

But now we are here, and all the Christmas presents I had shipped from Amazon were here before us, and the sweet tea is plentiful and family’s already come ’round to play… it promises to be a good time.  I’m trying to stay away from work as much as possible, but have so far checked email daily like a sucker.

I’m looking forward to some un-scheduled time.  No having to be somewhere at this time or meet someone at that time.

Oh and maybe some writing if the inspiration strikes.  Bye.