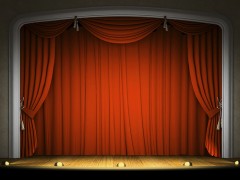 Just the other day I learned there’s a word in German which is defined as the “vicarious embarrassment” a person can feel whilst watching another party doing something embarrassing   The word is fremdschämen, and I’d like to get it integrated into my vocabulary as I’m very prone to experiencing this embarrassed-by-proxy emotion.  In fact, I seem to be somewhat inclined to the “transfer” of other emotions, as well… let me expand.

Last week I took Keaton up to her school to watch the third-through-fifth grade spelling bee.  Not just some rinky-dink thing, this was an “official” Scripps Howard rules bee, complete with fee paid to the aforementioned governing body to both use their rules and qualify winners for advancement to the state and national level (you know, the one they show on ESPN2?).  She wasn’t in the spelling bee, mind you, they don’t let the K-through-2 kids participate, but she had been talking about the thing so much that I decided we’d do a daddy-daughter date night centered around it.  Nevermind that, once getting there, the glam and seduction of the spelling bee seemed to dissipate quickly under the reality of the event and she was complaining of being “bored” within the first half-hour, for that’s not where this story is going.

We were talking about “emotions by proxy,” recall?  What I came here to remark on was the sense of pride I found myself feeling watching children who weren’t even my own.  Pride that these kids were getting the words right, pride in the way they handled being on stage and mic’d in front of a crowd of adults, pride at their aplomb even after misspelling and having to leave the stage.  Proud-by-proxy; it happens, at least to me.  That fourth-grade kid named Pinder, the tall slender one who just spelled “dramaturgical,” a word I’d never even heard, that kid’s smile and triumphant walk back to his seat after the judge’s “correct” was almost enough to bring tears to my eyes.

Is that odd?  I get it too sometimes when I see a local kid sing the national anthem in their hometown before a pro ballgame.  For real.