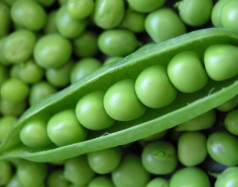 Today Cohen finally stuck a pea so far up his nose that it was irrecoverable.

Backing up a bit, he was in the (bad) habit of putting food in his nose and ears a few weeks back.  The phase came and went quickly, waxing and seemingly waning away to zero within the span of a couple weeks.  We thought we were past it, thought it was just a funny bit of growing up kid-stuff.  Until lunch today, when he got one pushed up just high enough that it’s only partially visible with a flashlight at the right angle.  Sharaun, in fact, was only somewhat sure there even was a pea up there until I got home from work and was able to confirm it by restraining the poor little man while I peered down his nose.

So, I consulted the internet for medical help.  There’s plenty of help out there for foreign objects in nose, even specifically peas for that matter – but most of it seems to assume that the pea is completely blocking airway in the offending nostril and as such relies air pressure (sucking, blowing, sneezing, etc.) to dislodge it.  Cohen’s pea, though, isn’t completely blocking his nostril.  He can breathe right around it so suction or blowing simply moves air past the not-going-anywhere pea.

Poor little guy just doesn’t get why mom and dad have him pinned-down to the bed, holding his arms and legs and shining a bright light into his face.  To him it’s torture.

Sharaun’s on the phone with the doctor now.  Poor Cohen got too tired of me sticking the suction bulb in his nose or blowing through his mouth or having pepper shoved at him in an effort to invoke a sneeze and just dropped into bed.  He’s sleeping peacefully and we don’t plan on waking him to deal further with the pea problem.  But to be safe we wanted to make and vet our executive parental decision with an actual M.D.  I don’t think even the doctor will be able to convince me that waiting hours in the emergency room or urgent care is the better than an early morning pediatrician appointment, anyway.

One Reply to “appease problem”