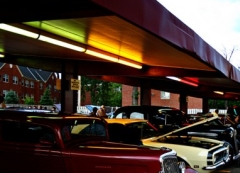 Seems I’ve traded writing for something else.  Not sure what it is yet, but pretty certain the swap came on the RV trip.  Sharaun suggested perhaps it’s a better sex life.  If so, I made the right choice and the writing will come back eventually, it’s all about the balance.  No but really, being on that trip made me think about how the folks of old and how they lived in much closer quarters than do we today – coexisting in a one-room cabin in relative isolation from other humans aside from your spouse; no wonder they had bigger litters in the old days.

To put it simply: writing has been hard.  I sit down almost every night with the best intentions and end up with nothing.  I feel surprisingly little guilt about it, which I think means that it’s not something I’ve “given up” but rather something that’s not coming easy these days.  I’ve been writing so long that I don’t think it’s something I can just quit.  Until I get back on the horse though, I’m going to be unashamed about how long I go between posts here.  I just don’t care enough to force it when it’s not right.  Like other “healthy” habits I’ve let go the way of the dodo, writing will return and return strong… I’m just going to have to wait it out.

Oh, Coco is crawling now – crawling all over the place, no need to call the developmental people with their slide rules and pocket protectors and physical training.  In fact, in the past week Cohen’s been all about what they call “cruising,” which is where he pulls up and “walks” by aid of his hands on tabletops, couches, or anything else.  He spends more time on his feet now than crawling, which I consider a clear signal that he’s wanting to be walking, and likely will be here shortly.  Like Keaton, he’ll be late gauged against “the norm” or other kids his age, but like with Keaton I couldn’t care less.

Don’t know if I wrote about it, but he can talk too.  His first word was “uh-oh,” and now he’s got “mama,” “daddy,” “sister,” “Keaton,” and “kitty” too.  He also recently got an award from President Obama for being the “Cutest Baby on the West Coast.”  OK that last part is bunk; but he can talk and crawl and is almost walking.  In fact I told Sharaun I think he’ll be walking on his own by month’s end.  She says I’m optimistic, but it’s true so I didn’t punch her or anything for sullying my good name.

Things at home are normal: Sharaun let me get a flagpole and an American flag.  I fly it most days, putting it up in the morning and taking it down again at night.  She bought a UF flag and we fly that on Saturdays instead.  I tried to do laundary and threw in some orange leggings at the bottom of Keaton’s hamper and they bled all over everything and ruined stuff.  Sharaun said they were dyed for Keaton’s Halloween costume last year and she had purposely been avoiding them down there at the bottom of the hamper.  Last Halloween?, I asked incredulously.  One year in the bottom of a hamper.  Keaton’s doing well in kindergarten and playing soccer on the weekends and dancing too – I believe we’ve got our yuppie-parent dance card all filled.